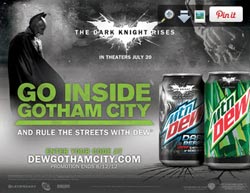 PepsiCo’s Mountain Dew is “dew-ing” it up big with a multi-pronged campaign around the upcoming summer blockbuster, “The Dark Knight Rises.”

The ambitious campaign reflects a natural synergy: The audience “sweet spot” for both Mountain Dew and the movie, from Warner Bros. Pictures in association with Legendary Pictures, is Millennials 18 to 24, according to the soft-drink brand.

The core concept: Enable fans of Mountain Dew and the Dark Knight to immerse themselves in the world of the Caped Crusader and Gotham City through customized experiences.

For the soft drink brand, the opportunity is to engage and reward existing fans, as well as attract new ones from the ranks of Dark Knight fans.

The campaign features an online destination site (dewgothamcity.com) that will offer exclusive content, including sneak peeks of scenes from the movie, trailers and storylines. (Some content will be open; some will require entry of a product code from 20-ounce or 2-liter Dew bottles, 12- or 24-multi-packs, or fountain cups from restaurants or movie theaters.)

The site will launch on June 18, well in advance of the movie’s July 20 opening, to help build excitement for the movie as well as the various Dew offerings and activations, says Harris.

In addition to the custom movie content, the site will offer fans who enter product codes chances to win exclusive Dew/Dark Knight Rises prizes. Its interactive elements will include Pongr activities -- like uploading pictures of themselves with Dew or dressed up as villains -- in which fans can participate for chances to win extra points and prizes. One prize: One of only five existing copies of the movie’s script signed by Christopher Nolan, its director, co-writer and one of its producers.

The brand will also offer a limited-time, Batman-inspired new flavor, Mtn Dew Dark Berry (on store shelves nationwide for eight weeks starting in June). Plus, select 16-ounce cans of Dew (also in stores in June) will use thermochromic ink to feature a bat symbol that, when the cans are chilled, turns from silver to Dew green.

Dew’s LTO movie tie-in products will be supported by point-of-purchase displays in stores.

In addition, the brand is leveraging Diet Mountain Dew’s sponsorship of NASCAR legend Dale Earnhardt, Jr.’s #88 Chevrolet. Members of the “DEW Crew” -- a Dew online club that engages its members in sharing, input and prize activities around #88 – can vote to select which of four Dark Knight paint schemes will appear on the #88 car in a race this season. Voting began May 12 on dewcrew.com (which links into Diet Mountain Dew’s Facebook page).

All of these efforts will be supported by paid advertising, including cable and prime-time television, radio and online.

In short, while brand/movie tie-in campaigns are hardly novel these days, “we believe that we’ve created a program that goes deeper – that sets Mountain Dew apart by offering many more interaction points and custom elements,” sums up Harris.