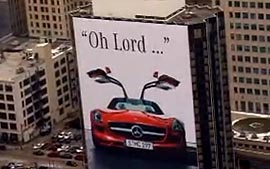 Lee Garfinkel, who had been chief creative officer at Euro RSCG for a little over a year, has been doing automobile ads in one form or another since the 1970s. He worked on Subaru before the suckers mooned. He was at Mercedes-Benz when Mercedes was trying to get a new voice in the 90s, worked Volvo and helped Cadillac break through when the company launched the first-generation CTS sedan around 2003.

What's changed? The media have, but not the need for a message.

"I used to say that 95% of all advertising is crap,” he says. “It still is, but there's just a lot more of it. God only made so many creatives."

He says the advertising trend has something in common with Hollywood where, for lack of good ideas, good stories, and of course good writers, movies have tended to rely more and more on effects and Olympian budgets.

"For years, it was about 'let's make it bigger and louder, rather than storytelling," he says. "It started in the 90s, with commercials getting bigger, productions getting bigger, but ideas getting smaller and smaller."

He says the exception proves the rule: "The VW spot with Darth Vader. Whether it was a great car commercial or a charming story, it stood out among a lot of crappy commercials in the Super Bowl."

Garfinkel tells some great stories about campaigns past. A great ad campaign is much more difficult to accomplish without strong leadership at the client, he says.

He relates how, in the 90s, when he worked on Mercedes-Benz U.S.A. at Lowe, Mike Jackson was the head of the company, and, per Garfinkel, was able to get away from an obsessive focus on the next campaign, or next launch and rethink, instead, the long-term strategy.

"I was the creative director on Mercedes in ‘93 when Jackson laid out the problem, which was that they had gone from selling 90,000 vehicles in the '80s to 60,000 in the early 1990s in the U.S." Infiniti and Lexus were building volume in the U.S. and consumer perception of the brand was that it was stodgy and unattainable. "And cars like the S-Class were big boats. I wasn't perceived as cool."

Mercedes-Benz loyal owner base were aging. "So Mike said, 'if we keep advertising the way we are in ten years our audience will be dead. We need to talk to forty year olds, and we need better vehicles and pricing," says Garfinkel. Part of that problem, he notes, is that consumers knew about the brand's $50,000 cars, and not so much about the C- Class and E-Class cars.

"He said we had to Mercedes off of its pedestal, but I said I didn't want to do that. 'We should just lower it a bit. But keep it on the pedestal.'" Garfinkel created ads showing  the C-Class and E-Class cars, and the soundtrack was Janis Joplin singing "Lord Won't You Buy Me A Mercedes-Benz."

"It was the commercial that changed the course of the brand," Garfinkel says. "But when we started to run it, the dealers hated it. The response was 'who is that screeching woman singing about Mercedes-Benz.' And I think we took it off the air for a couple of weeks," he says, adding that people started going into showrooms saying they'd seen the commercial and wanted to see the E-Class and C-Class cars. "The dealers said, 'um could you guys start running that commercial again?'" The answer was simple: people who grew up with Janis were in their forties in the 90s and could relate to her."

Garfinkel says the agency realized through research that you could be more comedic for a car like C-Class without turning off S-Class owners. "We were kind of keeping eye on the balance between sophistication, comedy, and entertainment. The best brands are the ones with the best strategy and articulation of it."

The favorite of his campaigns was for the Subaru Justy, an all-wheel drive compact the company brought into the U.S. in the 1970s that was meant to appeal to young consumers and was priced at about $6,000. Part of Subaru's difference is they were the first to have all-wheel drive for all of its vehicles.

"So we were targeting young people who might be buying their first car,” he said. “And I thought about it and said to the team, 'Imagine you are in your 20's and want to pick up your girlfriend, but there's a blizzard, would you rather be driving a Toyota or a Subaru?'"

The ad, set to Percy Sledge's "When a Man Loves a Woman" has a guy calling his girlfriend, who tells him her folks have just left and would he like to, um, come over. He gets into the Justy, right as a thunderstorm begins, but because of the all-wheel drive makes it there fine. Except that her parents open the door to his great chagrin, as they had tried to leave but were forced to come back. He stares at them, crestfallen, as they ask what might be bringing them over on such a horrid night. Voiceover: "Unfortunately, not everyone drives one."