Nissan Is Back In Black (Spandex) 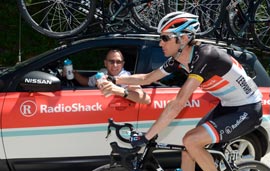 Nissan is back for the second year as automotive sponsor of the Amgen Tour of California. It’s the U.S. version of the Tour de France, but you probably haven’t heard of it unless you follow bicycle racing as closely as Europeans do. Nissan hopes to pique our interest with an assist from NBC Sports, which will broadcast it live.

The eight-stage, 750-mile road race started this week, and concludes in Los Angeles on the May 20 following stops in 40 cities. It's not for the faint of heart, as it snakes along parts of the Pacific Coast Highway, across mountains and along city streets, with riders powering through the drizzling, cold breaks in the otherwise balmy weather. Some 15,000 people reportedly turned out for the end of Stage Three yesterday in Livermore, Calif. (Peter Sagan with team Liquigas-Cannondale took that one.)

Nissan is in its third year as official automotive sponsor of the race (having replaced Volvo) and will own that title through 2014. The Japanese automaker has brand activity at each stage and is furnishing 40 vehicles for the providers of lead, operations and medical services, as well as VIP cars that are part of the official race entourage leading and following the riders’ peloton.

Jay Schaffer, Nissan North America's promotions manager, says the race is the first event outside one of the various auto shows to feature the redesigned 2013 Altima sedan. "We are putting lots of activation onsite," he says, noting that the new Altima is serving as pace car for the race. Also featured are the all-electric Leaf, and the Murano convertible, serving as team medical vehicle.

Schaffer says all the stages have been packed, giving Nissan its own stage of sorts. "In terms of the fan base that comes out, the number we're hearing is 2 million at roadside, as they go through various cities and countrysides, so that's a big crowd. It gives us a chance for deeper engagement. So we have a lot of innovative, creative ways to fire up fans and support the team as well."

The Nashville, Tenn.-based U.S. sales arm of Nissan is, for example, presenting sponsor for two stages of the race. It’s also part of a first-time program in which people can bike the last segment of the course before the eighth and final stage. That event, called "Nissan Ride Before the Pros," takes place this Sunday. Cyclists (who don't have to be spandex-sheathed carbon-fiber-straddling weekend warriors) get to ride on the five-mile closed course that culminates the race. It starts and ends at the official finish line at L.A. Live, the newish entertainment complex smack in the middle of downtown.

Nissan also has vehicles on display at the Lifestyle Festival, an interactive, free-to-the-public event at the finish of each race stage. It will feature the newly launched Altima and will hold a sweepstakes for a chance to win a Nissan vehicle, as well as a bike challenge and the opportunity to design a t-shirt.

Nissan's sponsorship of the Tour evinces the automaker's sports-marketing pillar, which is less about couch sports and oriented more toward getting people into fitness, sports challenges, and personal improvement. Nissan started heading that way in a big way in 2008 via a partnership with active-lifestyle publisher Rodale Press. It began with Nissan becoming official sponsor of the 2008 USA National Track & Field Team and went on to the automaker extending its presence to vehicle displays, appearances, local dealer integrations, kiosks, giveaways and sweepstakes at endurance races around the country under a "Master the Shift" banner that aligned with Nissan's former "Shift_" tag.

"Master the Shift" gave way to "Innovation for Endurance" last year, as Nissan turned its focus to the new electric Leaf. Last year's program included vehicles and branding at a dozen major races including the New York marathon. The automaker also launched a Facebook community page that includes a blog and video posts about motivation, training, gear, health, lifestyle and the environment. Nissan also introduced a mobile application with health and fitness content, content from the Facebook page, a "Nissan Innovator" series of workouts and social sharing capabilities.

automotive, marketing, sponsorship, sports
1 comment about "Nissan Is Back In Black (Spandex)".
Check to receive email when comments are posted.
Next story loading