How Search And Media Might Think About Respect And Reinvention 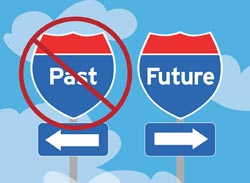 Media companies know a thing or two about economics forcing change. In Sunday's Orange County Register, syndicated columnist Mark Steyn muses on world economics and how the working years of Western civilization continue to shrink. Take a line or two of what he writes out of context, and the sentiment applies to the shifts in online advertising, marketing and journalism. He believes "too many citizens of advanced Western democracies live a life they have not earned, and are not willing to earn."

These universal concepts point to the central metaphor of change. During the weekend in an email, MediaPost President Jeff Loechner pointed to a thought-provoking post written by Gigaom's Mathew Ingram, who refers to commentary from Tim McGuire, former newspaper editor, Pulitzer judge and now journalism professor at Arizona State University.

In the commentary, Ingram writes: "To survive, become a guide and a helper." I believe both can build trust. He explains how McGuire views the future of traditional media players: "traditional newspapers are profoundly troubled, but not necessarily doomed." McGuire believes that by no means will paywalls or mobile apps allow media companies to return to "the glory days." They simply must adapt to declining print revenue by changing to survive.

Aside from traditional newspapers, all businesses must reinvent themselves and become open to change. Last week, Google took heat from media and search marketers for changing the free Google Product Search into the paid Google Shopping service. At the Sugarland concert at the Verizon Wireless Amphitheater Saturday night, attendees had the opportunity to vote on the lineup of songs by texting requests to a specific number.

Consumers always had a voice, even before the Internet. They spoke by either opening or closing their wallets at brick-and-mortar stores. Now they also speak through comments on Web sites and recommendation engines that get sourced and served up across the Internet where 2.3 billion global Internet users searched, shopped and surfed for information in 2011, according to 2012 Internet trend data from Mary Meeker at Kleiner Perkins Caufield Byers.

For the three-month period ending April 30, 36% of mobile subscribers, up 0.3 percentage points, accessed social networks or blogs, according to comScore. The data firm reported that 234 million Americans age 13 and older used mobile devices during the same time frame.

The rise in mobile use reflects one change forced by economics, not only advancements in technology. It required executives at media, search and marketing companies to change their thinking on respective business strategies and how they would earn the respect of consumers online, as they did in stores.

Early on, search engines, brands, and media companies earned the respect of people searching and consuming, as well as following or advocating products and services. Economics forced the hand of change, requiring companies to reinvent themselves to keep pace with growth and maturity. It may also mean that some need to re-earn the respect and relearn how to gain it. Trust has become part of the basic life cycle of economic change.

media, mobile, publishing, retail, search, social media, social networks
1 comment about "How Search And Media Might Think About Respect And Reinvention".
Check to receive email when comments are posted.
Next story loading