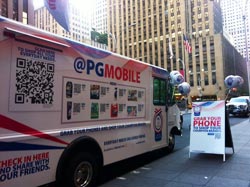 If you live in New York City, you’re unlikely to happen upon a Walmart store walking down the street. Like other big-box stores, Walmart has had a tough time cracking the Big Apple and other urban centers. There are various reasons, ranging from neighborhood opposition to land use restrictions.

But the retail giant has teamed up with Procter & Gamble on a month-long marketing effort in New York to promote online and mobile shopping and its free delivery service. Now, urban dwellers can order from Walmart even without a brick-and-mortar outlet nearby.

The @PGMobile initiative kicking off Thursday centers on a truck that will visit a dozen popular locations around New York during June. It features QR codes for several P&G /Walmart products, including Bounty paper towel, Head & Shoulders shampoo and Iams dog food on one side. Passersby are invited to use their mobile phones to scan the codes to instantly buy the products at Walmart’s “everyday low prices.”

Parked outside News Corp.’s midtown headquarters on Thursday morning, the faux food truck was surrounded by some half-dozen young staffers in QR-code-emblazoned T-shirts who exhorted busy New Yorkers to pull out their phones and scan any of the eight product codes posted on the vehicle.

Absent, however, was the star attraction: Olympic athlete and World Champion runner Tyson Gay, who was scheduled to appear in connection with P&G’s role as an Olympics sponsor. Apparently, he had missed his flight. Still, P&G spokesperson Tim Marrin was on hand to explain that city folks can buy its CPG goods through Walmart at the click of a mouse or mobile button.

“We truly believe that’s the future. But people have yet to really adopt buying consumables online,” he said. “We think having free delivery, and getting this message out to urban shoppers who don’t have access to Walmart stores, is a great first start.”

Walmart.com introduced free home shipping for purchases of $45 or more last year to better compete with online retail powerhouse Amazon. It is also taking other steps to ramp up e-commerce and m-commerce efforts, including selling big-ticket items like Sony and Samsung HDTVs exclusively online, allowing customers to order out-of-stock items from their smartphones, and launching an app for in-store aisle search.

Online sales accounted for only about 2% of Walmart’s revenue last year, while overall growth was about 8%. Amazon, by contrast, had 41% growth. P&G has its own online store, but Marrin didn’t disclose what proportion of the company’s sales are online.

In addition to QR code-scanning, the @PGMobile promotion -- as the name would imply -- also includes a Twitter component that enables people to get information and request the truck comes to their neighborhood. “On the days we don’t have a fixed location, then we’ll go visit other neighborhoods,” said Marrin. The Fashion District, Union Square Park and the Big Apple Barbeque Block Party are among the upcoming stops.

P&G and Walmart also plan to give out 200,000 sample packages, including the Gillette Fusion ProGlide razor and Downy Unstoppables laundry scent-freshener.

Along with New York, P&G and Walmart are running a similar promotion in Chicago focused on bus shelters on Michigan Avenue that feature QR codes for mobile shoppers and enlarged images of Olympic athletes, including swimmer Michael Phelps.