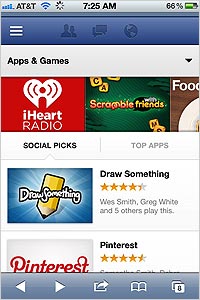 Facebook took the wraps of its App Center Thursday with the aim of providing its more than 900 million users with an easier way of finding games and other applications on the social network.

First announced last month, the App Center serves as a central hub for Facebook-integrated apps that are available on Facebook.com as well as through the company’s iOS and Android apps. It will recommend apps based on a user’s interests, apps they have liked before, and the kind of apps their friends have installed. People can also browse apps that friends are using.

The App Center launches with some 600 Facebook apps -- mostly games, including Nike+ GPS, Draw Something, JetPack Joyride as well as Pinterest -- that Facebook has selected based on user feedback and other quality-control standards. Each app has its own description page with ratings and screen images and titles are organized by familiar categories like games, entertainment, music, news and sports.

While many of the same titles so far could be found in Apple’s App Store or Google Play, what should set the App Center apart -- befitting Facebook -- is its social component. The company can tap its vast trove of social data to offer personalized recommendations that can lead people to explore more apps and discover lesser-known titles they may not otherwise have found.

At the same time, Facebook has emphasized that it doesn’t want to compete with other app stores on mobile devices including the dominant ones run by Apple and Google. Instead, it’s sending users to other app markets to download apps. Indeed, the company pointed out it drove 83 million users to the App Store directly from the social networking site in May. It also noted that seven of the top 10-grossing iOS apps and six of the top 10 Android apps are integrated with Facebook.

The App Center is rolling out to U.S. Facebook users starting Thursday night, and will be available to everyone in the coming weeks. The new app repository comes on the heels of Facebook rolling out carrier-based billing for mobile in-app payments using Facebook Credits. Taken together, the two steps could help to drive more mobile revenue as it pushes to ramp up monetization of its 500 million mobile users worldwide.