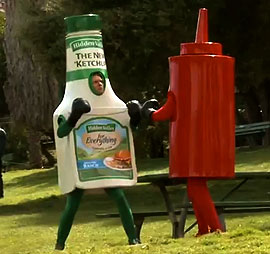 Hidden Valley is in a bottle battle royal against ketchup in a new campaign on digital channel BuzzFeed. The effort touts a new formulation and packaging, Hidden Valley for Everything, designed for use as a condiment rather than strictly as a salad dressing.

The campaign launched on Wednesday with a home page takeover that includes a minute-and-a-half video -- a first for BuzzFeed. The video, which has a raw, un-staged look, shows two guys -- one dressed as a bottle of Hidden Valley for Everything and one as a ketchup squirt bottle -- beating each other from pillar to post around a city while bystanders look on.

The effort, via Tribal DDB, aligning with BuzzFeed's orientation toward buzz-worthy visuals, is intended to appeal to Millennials who probably aren't all that attuned to Hidden Valley's more family-oriented ads for original Hidden Valley Ranch salad dressing (or very many years removed from a time when eating veggies was something they were told to do.)

"We know there are a number of consumers who are passionate about using Hidden Valley on things other than salads and veggies," says Shaunté Mears-Watkins, marketing manager for the Clorox division. She tells Marketing Daily that traditionally, about a quarter of customers use the dressing other than on salads. "They use Hidden Valley Ranch on things like potatoes, pizza, and sandwiches, so we know there's a lot of pent-up passion and excitement for a version better suited for dipping and spreading. And we know that BuzzFeed readers socialize content, so we felt it was the right place to put the message."

Hidden Valley for Everything has a variety of placements on the BuzzFeed home page, an approach that Toyota got first dibs on when it launched a similar program on BuzzFeed to tout the Prius c to the urban 20-something cognoscenti. Thus, BuzzFeed's top-page "win" and "fail" buttons feature the Hidden Valley Ranch character and ketchup guy, respectively.

Jon Steinberg, president at BuzzFeed, says at least one element of the month-long effort is a first for the company. "We've never done an in-stream video unit on the home page like this." He said the page gets about 350,000 visits per day. The links on the video and the other in-page elements go to Hidden Valley's own page on BuzzFeed running a larger format of the video. The company also has a Facebook page touting the new product.

"The plan is that this is the first of a series of videos that will continue to build momentum behind the brand," says Mears-Watkins. "We expect to have more installments of [the two characters'] antics."

At retail, the new, thicker formula will be in the ketchup aisle and in a different, condiment-style bottle. "At point of purchase, we have shelf toppers you'll see in stores this summer, and also retail specific marketing," says Mears-Watkins. She adds that TV support will be via tags about the new "For Everything" formula on the back end of advertising for the traditional formula of Hidden Valley Ranch.