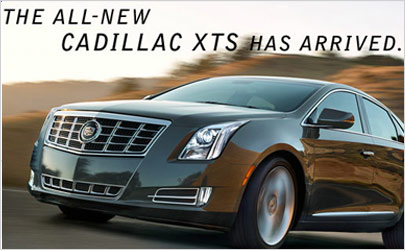 The new Cadillac XTS sedan represents a new chapter for the GM luxury division, as it ventures beyond its three-vehicle lineup of the CTS sedan, SRX crossover and Escalade SUV. The new car, which starts at around $44,500, resides between a mid-size and large sedan and replaces the discontinued DTS and STS duo.

The 2013 XTS is also the new flagship for Cadillac, and serves as the up-market bookend of a portfolio that will soon include -- at the other end of the spectrum -- the ATX compact luxury car, which arrives later this year. That car, which be a competitor to cars like Audi A4 and BMW 3-Series, is also the gateway vehicle Cadillac is counting on to bring in brand-new buyers who will considerably lower the median age of the Cadillac owner base -- which is now about 62, per Cadillac Global Marketing Director Jim Vurpillat. "We about five years older than the average luxury [auto] buyer, but part of that is the youngest luxury segment is compact."

Vurpillat tells Marketing Daily that deliberately targeting younger consumers doesn't work because it does nothing to change perception. "Rather than just going after younger buyers, it's really more important not to be perceived as 'old.' So, for instance, last year we advertised V-Series [Cadillac's high-performance sub-brand] significantly, because it's a perception-change agent," he says.

The brand was in New York this week to show off the XTS and the new telematics platform, CUE (for customer user experience), of which XTS is the first beneficiary.

Vurpillat points out that XTS advertising, which focuses on CUE and other wizardry, is technology-centric.

CUE was designed to look and function like a smartphone or iPad, with basically no buttons at all. Rather, CUE uses gesture-sensitive technology and a tactile-response or "capacitive" faceplate where icons kick slightly when you touch them.

Advertising focuses on technology: one spot asks viewers to count the number of buttons on the control console of their current car, and then compares that to the array in XTS, which technically doesn't have any buttons, since the capacitive-icon feature extends to the whole column, making the entire telematics platform look and function a bit like a big smartphone.

Another ad for XTS touts the car's Safety Alert seat, which elicits a physical "nudge" either to the sides, back or front, depending on whether the vehicle is warning the driver that it is veering into a different lane, or if there is crossing traffic in front or behind.

Vurpillat says everyone who takes delivery of XTS gets the iPad 3, in which is installed with an app that walks the new owner through CUE. "Each dealership also has a trained technology expert," he says. "Two to three months before cars hit dealerships [sales staff] are trained on CUE." Vurpillat adds that the division has also sent 25 connected-tech experts to Cadillac regions to assist dealers.

Matt Highstrom, Cadillac interaction designer, tells Marketing Daily that CUE will be rolled out to Cadillac's other vehicles after XTS, starting with ATX and SRX. "In today's world people expect to be able to pick up a device and have it operate like the device they are accustomed to. An easy interface is fundamental," he says.