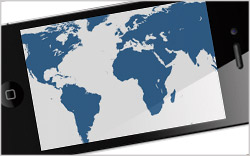 Mobext, the mobile marketing arm of Havas Digital, has launched its own text-messaging service to make it easier for clients to run messaging campaigns across multiple markets globally.

The technology, dubbed “Simplified Automated Messaging” (SAM), is designed to roll out mobile text campaigns quickly across regions, especially where SMS remains a key marketing vehicle because of broad use of feature phones.

The platform includes various features such as the ability to send personalized, highly targeted SMS to an opt-in mobile database and power two-way text campaigns, which might include polling, voting, contests and coupons. The main benefit, according to Phuc Truong, managing director of Mobext U.S.: The technology hooks into local country messaging aggregators so the agency can launch coordinated, multi-country campaigns at once.

To that end, SAM is already live in the Philippines (called the world’s SMS capital), India and Argentina, with plans to launch it before year’s end in Brazil, Mexico, Colombia, Chile, UK, Poland, Portugal, Spain, France, the U.S. and Canada. In addition to India and the Philippines, the platform in Asia will be launched in Indonesia, China and Singapore.

Arthur Policarpio, Asia-Pacific head of Mobext and CEO of Mobext Philippines, said most third-party SMS solutions are overly complex and lack a global scale. “It is an extremely complicated process to secure short codes, as well as push SMS pipelines on a per-country basis. SAM simplifies all this,” he said, through a user-friendly Web-based platform.

A report released by Denmark-based research firm Strand Consult suggested alternate messaging services from Facebook and other companies is eroding carriers’ revenue from SMS globally. Still, even in countries with high smartphone penetration like the U.S., text messaging remains the most common non-voice activity.

“Mobile messaging is often overlooked due to mobile rich media, smartphones and tablets, but we feel it is a critically efficient element,” said Rob Griffin, global director of product development for Havas Digital.