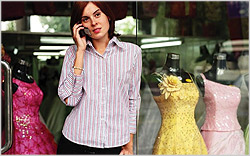 People may be using their smartphones as a shopping tool in the stores, but that doesn’t mean they’re buying less from the retailers. In fact, the influence these mobile devices will have on annual in-store sales is expected to increase more than threefold over the next four years.

According to a new study from Deloitte, the “mobile influence factor” (or effect of smartphones on in-store sales) on retail purchases will increase to $689 billion (or 19% of total store sales) by 2016, up from the current influence factor of $159 billion (or 5.1% of sales). (Mobile sales, meanwhile, are only expected to be $30 billion at that time.) Further evidence suggests smartphone shoppers are 14% more likely to make a purchase in the store than non-smartphone users.

“That might go against conventional wisdom,” Kasey Lobaugh, principal and director of multichannel marketing for Deloitte, tells Marketing Daily. “[Retailers] need to provide the right information and functionality consumers are looking for. It’s really a great opportunity to aid in purchasing.”

The spike in mobile influence will likely come as smartphones become even more prevalent among consumers, along with people’s comfort level with the devices. According to the survey, 40% use the device for store-related shopping after they have owned the phone for six months. After using it, however, they consistently use their phones on more than half of their shopping trips.

According to the survey, nearly half (48%) of U.S. consumers said their phones have influenced their decision to purchase an item in-store, with usage highest at or near the point-of-purchase in a retailer. More than 60% of them use their smartphones in the store, and more than half have used them on their way to the retailer.

Regardless of where they use their phones, people who use their smartphones as a shopping aid are more likely to make a purchase than those who do not. Nearly three-quarters of smartphone users (72%) said they made a purchase on their most recent shopping trip, compared with 63% who didn’t use a phone.

The way people are using their phones is of particular importance to retailers. According to the study, 37% of smartphone owners used a third-party shopping application, while only 37% used a retailer’s mobile application. Lobaugh suggests people may not be getting what they’re looking for from the current incarnations of retailer apps.

“Most retailers are serving up their Web site on a mobile device. I would argue the Web site isn’t what they’re looking for in the conversion process,” he says. “You have consumers who are trying to make complex decisions. The more information they have at their fingertips the more likely they are to make [a purchase] decision.”