More Than Fireworks In Philly On the Fourth 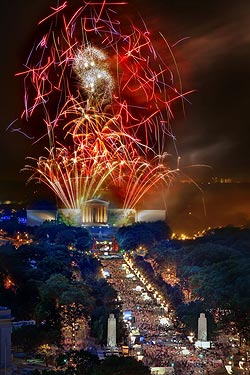 Forget (if you can) New York’s Hudson and East River fireworks that will go down on Wednesday night, the 4th of July. Philadelphia, where the declaration was signed, is loading up the calendar for the federal holiday.

The city, which has been in the midst of a cultural reorientation around Ben Franklin Parkway, will, among other things, be holding what it calls the largest free outdoor Independence Day concert in the country, featuring acts like The Roots, Queen Latifah, Joe Jonas, and Common.

The City of Brotherly Love is also doing a range of other programs this week around art, culinary and history.  A "Taste of Philadelphia" program will plate fare from popular food trucks and restaurants along the banks of the Delaware River. The dishes will be paired with a concert featuring international jazz bassist Gerald Veasley and African folk violinist and jazz icon Regina Carter. Fireworks to follow.

The National Constitution Center will re-enact a Revolutionary War bivouac while the city will have a "Tippler’s Tour" involving 18th-century drinks and snacks, which are actually the regular fare at the City Tavern.

There is also going to be an all-you-can-eat ice cream festival, entrance to which requires a donation to the Joshua Kahn childhood leukemia fund.

The events are delineated at the Greater Philadelphia Tourism Marketing Corporation's tourist sites visitphilly.com and uwishunu.com, which has a digital radio stream called "HearPhilly" delineating the events.

The city's Klimpton-owned property, Hotel Palomar Philadelphia, will, starting this month, let people book their stay with a "Philadelphia Barnes Foundation" package that includes deluxe accommodations at the Hotel Palomar, priority access to The Barnes. That deal runs through the end of the year.