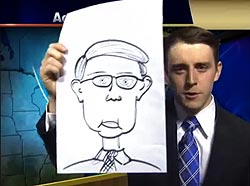 Gas Station TV (GSTV) is shifting from regular to premium. The gas pump media company is changing its brand positioning in tandem with a big expansion program. GSTV says its network reaches 32 million monthly viewers in over 110 DMAs after having added six new markets in the past six months. It plans to expand to three additional markets before year’s end. GSTV got a $50 million infusion from Wayne, a GE Energy Business, late last year to help foot the bill.

The new effort dispenses with the six-year-old company’s identification with and against traditional television, "Prime Time at the Pump." Instead the network is putting its consumer marketing solution -- which David Leider, CEO of the Birmingham, Mich.-based company, says represents the reality of GSTV's business -- driving consumer engagement and conversions on behalf of brands like Chevrolet, Choice Hotels & Suites and McDonald's.

Out is the long-time "Prime Time at the Pump" brand mantra. In is "Driving Consumers," a double entendre (given that 100% of GSTV's audience is drive-up). "[The Prime Time positioning] helped with exposure but frankly, did us a disservice because it only talked about us as a form of TV," says Leider, explaining to Marketing Daily that the TV identification is a dissonant message when it comes to where they go to buy GSTV. "Our media is sold out of Internet and emerging-media groups, not as TV media."

The new B-to-B campaign uses a spokesperson character, a woman who speaks from the pump-top TV screen, touting the virtues of GSTV for driving engagement and consideration. The woman who plays the talking head of the anthropomorphic pump (Leider says GSTV will run a promotion to name her) is, for what it's worth, a dead ringer for Marissa Mayer, the new chief at Yahoo.

GSTV is touting its ability to merge traditional advertising with location initiatives, such as a program it had done with Choice Hotels International, which franchises around 6,100 hotels worldwide. The **GSTV (**4788) mobile program directs consumers to the Apple Store for an app that allows consumers to search Choice hotel locations and prices. GSTV promoted it with a contest last month that gave away ten $50 gas cards every day for two weeks and a year's worth of gas as the grand prize.

The other play GSTV offers is integration with partner content. The company integrated a recent Chevrolet dealership campaign spoofing “The Office” with AccuWeather. In the ad, dealership staffers are quirky “Office”-esque types who draw weird depictions of each other. Cut to AccuWeather, where the meteorologist is holding a drawing meant to be him, explaining that two of the staffers did it.

Leider says that while people only spend on average five minutes at the pump, they are willing captives and remember the ads because "every advertiser has its own ad pod." He says 95% of people watch and the same percentage want to watch again. "Essentially, we found a place where there is that five-minute downtime in the day." Content is focused on sports, entertainment, local weather, personal finance and business.

GSTV has its own content program called Your Neighborhood, a hybrid platform with social media where people in local GSTV markets can promote local events at Event.gstv.com. Per Leider, GSTV sees a 7% lift on conversion to the convenience store from the pump. While about 45% of consumers naturally go inside the store after filling up, stations with GSTV get a 55% pump-to-store traffic.