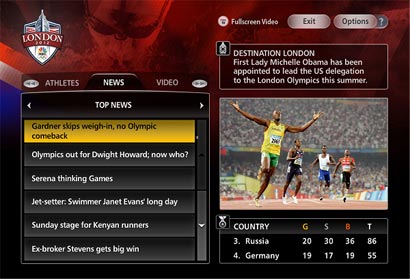 Verizon plans to release an Olympics TV app, dubbed the Verizon Olympics 2012 widget, built on the Ensequence platform to make the TV experience more social. The app automatically populates with content from the NBC Olympics and allows viewers to use their remotes to search for and read top news stories, events schedule, athlete bios, as well as play more than 50 video clips.

The Verizon Olympics 2012 app supports an auto-scrolling feed about London and keeps count on who and what country won different medals. The viewer can toggle between the application and the video on the full screen via the FiOS TV button on the remote control.

The application is available in the Widget Storefront and will be triggered on NBC, NBC Sports, MSNBC, CNBC, Bravo and Telemundo starting Wednesday.

This is the first implementation of this type of app on Ensequence's cloud storage architecture, but it isn't the first time the company's technology supported interactive enhancements for Olympic Games. The company worked with Olympics and DISH Networks in 2008, and DISH and Verizon using EBIF in 2010.

At the Social TV Summit in Los Angeles, Marc Karzen, CEO and executive producer at Relish, said TV is not a screen -- it is an experience. The idea of creating consistent quality content that ties in with social interactions becomes very compelling, he added.

There are television shows that will add social interactive features next season, Karzen said. Television, however, isn't the only visual media reaching to combine live and social experiences. YouTube video channels have begun to schedule programming. The YouTube community has been focused on view counts, which helps to attract sponsors and advertisers.