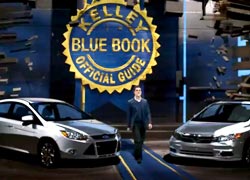 Kelley Blue Book (KBB.com) is launching its first ever consumer marketing campaign, "Projections," to tell the world that it has a raft of tools to help consumers shop for new cars -- not just figure out what a pre-owned vehicle is worth.

The 86-year-old auto research brand is following up a series of radio spots that started early this year. The first-ever TV ads hitting airwaves July 30, along with a first-in-ages redesign of its logo, are intended to explain that KBB.com is a leading new-car resource.

Per a company release, KBB.com expects the 30- and 60-second TV spots to reach 189 million people through the fourth-quarter run. The buy includes the 2012 Summer Olympics on DirecTV and on channels such as CNN, Fox News, ESPN, MTV, TNT, History, Comedy Central and the Food Network.

Jared Rowe, president of Kelley Blue Book, tells Marketing Daily that the ads target new-vehicle buyers ages 18-49. He explains that while KBB.com is pretty much universally known for vehicle valuations and car-shopping insights to consumers, dealers, finance and insurance companies, and government agencies.

Rowe says the campaign was necessary because a lot of people still perceive KBB.com first and foremost as a trade-valuation provider, which is no longer the case. "We are an iconic used-car vehicle valuation provider, but for years we have also had new-car value and content, so this is about promoting that more broadly."

Rowe says KBB.com gets 14 million uniques per month, and adds that the company has also revamped its Web site to put the focus on new-car purchase tools. "In key areas, we now have unique landing pages for things like cost of ownership, and consumer and expert reviews."

The campaign, via Detroit-based Doner, uses 3D Projection Mapping to support the new tagline “Everything you need to make a smart new-car decision.” The effort focuses on three new-car shopping tools: Fair Purchase Price (showing the average price others in one's area paid for the same car based on transaction data updated each week); 5-Year Cost-to-Own (intended as a future profile of the costs a consumer can expect to incur today and throughout a five-year vehicle ownership period); and consumer and expert reviews and ratings.

The Kelley Blue Book logo is also getting its first official update, part of which involved dispensing with the ribbon on the seal, which Rowe said consumers found dated.