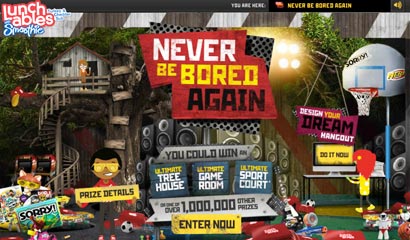 Kraft Foods’ Lunchables has launched an integrated “Never Be Bored Again” campaign that includes multiple kid-oriented elements, including an instant-win game, free game kiosks in malls in key markets, and a cause-related component.

Digital/social efforts, TV and movie-theater ads, on-pack messaging and public relations are being used to drive kids (with their parents’ permission) to the campaign’s hub or “Fort” site.

Once they enter the online instant-win game, they can also create their own avatars to play games or to create customized virtual treetop clubhouses and other “cool hangouts,” Sport Court backyard courts or “ultimate game rooms.”

The instant-win game offers chances to win one of more than 1 million prizes, including video downloads, 25,000 toys and games, and three real-world grand prizes that parallel the online activities: a “treehouse of your dreams,” a Sport Court backyard court, or an ultimate game room.

The free game kiosks, featuring “life-size” LCD screens, will be in place in select malls in Chicago, Atlanta, Dallas, New York and Los Angeles through Sept. 15. Players use their bodies to control avatars that compete in dodgeball, basketball or a “Run from Boredom” game with players in other metro areas.

In the dodgeball game, Avatars represent users’ movements, but pictures of other players are present. After a match, users are presented with photos and can post their initials for other markets to see.

In addition, the brand has partnered with celebrity mom Tori Spelling on a national program to support the Boys & Girls Clubs of America. Starting Aug. 28, each time someone uploads a “boredom-busting” photo on the “Never Be Bored Again” app on Lunchables’ Facebook page, a $1 donation will be made to the charity (up to $100,000).

To drive awareness and traffic to the instant-win game/online activities, Lunchables is running a TV spot (in 30- and 15-second versions) through late November that shows prizes dropping out of the sky on parachutes.

The brand is also running its first long-form cinema spot, airing before kids’ movies, and display ads and editorial sponsorships on sites such as Nickelodeon, Disney, Cartoon Network and Miniclip.

“The essence of the Lunchables brand is to promote freestyle fun that lets kids be kids, and the ‘Never Be Bored Again’ promotion is designed to help us extend that fun beyond lunch,” says the brand’s director of marketing, Joe Fragnito.

The promotion is timed to reinforce the brand’s message during back-to-school time, and also serves to promote new offerings, including Lunchables with Smoothie and Lunchables with Fruit, Fragnito adds.

Lunchables products are consumed primarily by kids in elementary through middle school, but 25% of the brand’s consumption is by adults, he reports.

Importantly, the brand is consumed as an “occasional treat” (on average, its customer households buy one Lunch Combinations per month), according to Fragnito. This differentiates the products from daily brown-bag lunches -- hence its “fun” marketing positioning emphasis, he says.