Report: Apple In Talks With Cable Companies Over TV Partnership 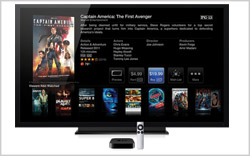 Apple Inc. has been talking with some of the biggest U.S. cable operators, including Time Warner Cable, about teaming up for a new device for live television and online video content, according to a new report.

Unnamed sources tell The Wall Street Journal that while no deals have yet been reached, Apple is eyeing a similar kind of deal to the one it struck with mobile wireless providers for its line of iPhones. In theory, the cable operators would offer content and data services for an Apple-made device loaded with Apple software.

The report said it’s unclear whether the device in question would be a new technology embedded into televisions, a set-top box or an updated version of Apple TV, an existing Apple device that allows users to access Web video on their television sets, but not cable TV content.

An Apple spokesperson declined to comment on the story.

If the sources are correct, it would appear that Apple -- by teaming with cable operators instead of trying to license content directly from broadcasters and cable networks -- is not pursuing the U.S. television market with the same boldness with which it went after the major record labels in the past.

Of course, cable providers and media companies are reluctant to see Apple dominate the television industry the same way it has come to dominate digital music.