Canon Imagination Goes To Hollywood And Beyond 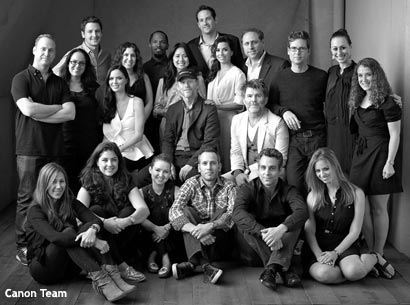 How does a camera company get away from the product-attributes trap? You know -- "Our camera has flex-focus, a double-shot shutter that senses your mood, and a built-in espresso-maker with telephoto lens that doubles as a foam dispenser." Well, Canon U.S.A. and its AOR, Grey, have been putting the focus, so to speak, on the camera as conduit for visual expression since last year, when it launched the "Long Live Imagination" campaign and its "Project Imagin8ion" program, wherein film director Ron Howard chose eight photos taken by consumers and gave them to his daughter Bryce Dallas Howard, who made an award-winning short film based on them.

Now comes "Project Imaginat10n." The effort brings back the Academy Award winner Howard but now instead of one film, there will be an entire film festival comprising 10 films again inspired by consumer generated photos uploaded as part of a social media campaign. The films will be directed, respectively, by Eva Longoria, Jamie Foxx, Biz Stone, Georgina Chapman, James Murphy and five others.

The effort, at imagination.usa.canon.com, allows consumers to submit photos, which will be screened, vetted, and winnowed down by Canon, Ron Howard and community voting. Ultimately each of the ten filmmakers will choose ten photos representing ten storytelling elements, and then hopefully find a way to apply those images to a storyline. The campaign will culminate next year with the Canon “Project Imaginat10n” Film Festival.

Says Rob Altman, manager of camera video marketing at Canon U.S.A.: "The campaign grew out of the idea that Canon supports consumer creativity and imagination and allows people to elevate their photography." When we started looking at this we found that messaging all about performance, features and spec, made it hard for consumers to differentiate us from the others. So we realized we needed another approach around encouraging sharing and communication between us and customers and between customers."

Ari Halper, executive creative director at Grey New York, tells Marketing Daily that the 360-degree supporting campaign will include page takeovers and banners and viral films, PR stunts, event marketing, press releases and media hits. But there will be no television advertising at least during the first phase of the contest, which will take about a year from the initial call for photos to the produced films.

Halper says Alliance looked for a range of people, not just directors. "We knew from the beginning we wanted to cover a range of participants. The whole idea was spawned by Ron Howard's statement last year that we are all creative, so to prove it this time we chose movie stars, TV actors, a fashion icon, and a tech person."

Altman tells Marketing Daily that engagement from last year's program far exceeded Canon's goals. "We got 96,000 photos over three and a half weeks; it blew away anything else we had done, but it also generated lots of communication with fans and consumers. And that's what we want: we want it to be a community for photographers and consumers."

The filmic approach replaces a more celebrity and athlete endorsement focus that Canon had used. Canon had been, for example, the official camera of the NFL, and had run ad campaigns featuring tennis star Maria Sharapova, and on products technology. "We really want to make it a two-way conversation rather than just advertising."