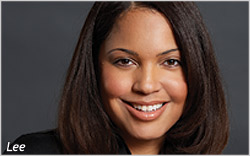 AT&T AdWorks is expected to launch an ad platform in September allowing brands to target ads online based on TV and mobile data, according to Danielle Lee, AdWorks VP of product marketing and innovation. Two undisclosed brands have signed up to participate in the initial rollout.

The AdWorks division worked with AT&T Labs to develop an algorithm that allows brands to target audiences based on aggregate demographic data from TV programs watched or downloaded on apps, games and videos on mobile.

The move will lead the company to support cross-screen ad targeting as technology becomes smarter at understanding consumer behavior and devices.

"This is not panel data, but rather actual first-party user data in aggregate," Lee said.

Common attributes in the data create audience segments. The "aggregate and anonymous" data comes from 10 million U-Verse set-top boxes, as well as 69 million mobile subscribers. The targeting data from TV will initially rely on demographic and geographic attributes rated to the top 100 TV shows.

The audience segments rely on TV and mobile data to target ads online, but Lee said AT&T plans to build out the service to focus on cross-channel targeting. Advertisers will then have an option to push the same ad across cross-platform. Once that occurs, AT&T will compete with companies like Microsoft Advertising, which recently rolled out a cross-channel ad-targeting tool.

The tool, aimed at national advertisers purchasing millions in ads, supports A/B testing the creative ads online first before bringing it to TV -- a trend that recently caught the attention of political marketers.

Lee also said AT&T could integrate the TV with the mobile data to build a bigger picture of consumers and audience segments. "We're just getting out of the gate with this," she said. "There are several ways we can take this product as it evolves."