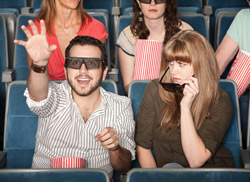 If Millennial men and women are from Mars and Venus, the latter inhabit a much more collegial planet, while Martians probably like to see emissaries from Earth crash land, or show up with DVDs of “Bum Fights.”

That might be a tad extreme, but marketers should pay heed to gender nuances when it comes to reaching Millennials. In markets like autos, for example, 20- and 30-somethings are a critical demographic for the all-important mid-size segment, and for smaller vehicles like Chevy Sonic and Spark, the new Dodge Dart, Ford's Fiesta -- not to mention high-end vehicles like the new Caddie ATS and BMW 1. The golden chalice is filled with consumers 18 to 35 for the simple reason that it costs a fortune to conquest a consumer from another auto brand than to make them your loyal customer when they are young. Auto marketers have to speak to men and women when advertising to consumers in these vehicle categories.

What are the differences between men and women when it comes to TV advertising? New research from Nielsen shows that Millennial males and females diverge when it comes to what appeals to them on the traditional tube. The firm finds, for example, that in terms of tonality and theme, men are looking for revenge, while women identify with imagery of strong, female celebrities in fun, high-energy situations. Guys? We like action-oriented, competitive scenes and extreme images. And men like slapstick, edgy and sarcastic humor. Silly, offbeat humor that’s not mean-spirited appeals to young women.

And it might make sense, when talking to men, to advertise that car on a web-stream of UFC fights, versus on TV. Nielsen finds that women ages 18-49 watch roughly 11 more hours of traditional TV per month than men.

The study breaks preferences down by differences between men and women in tonality, theme, humor and characters. Women prefer tonality that has lively, hip music and high-energy scenes, while men like a whimsically humorous tone. Women like generally happy situations and characters with whom they can relate. "Women relate to a more aspirational approach, connecting with happy situations that feature characters who allow a woman to imagine herself in their shoes," says the report. Men like the offbeat humor embodied by "normal guys" in exaggerated situations.