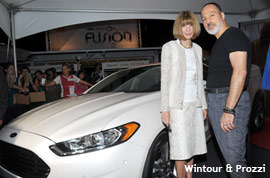 Ford Motor was in New York early this month to put the fashion plate on the 2013 Fusion, touting it as an exemplar both of affordable uber design and eco-friendliness. For the latter, the message was not just about the motor, but the recycled materials inside. Fashion's Night Out (FNO), of which Ford Fusion is the official car in the U.S., is an international program with about 20 countries involved. In New York, the event -- which involved about 900 stores -- was on Sept. 6, the day before the beginning of Fashion Week, of which Mercedes-Benz has title sponsorship.

Part of Ford's umbrella "Random Acts of Fusion" campaign for the redesigned 2013 Fusion, the New York program centered on a pop-up store co-sponsored and promoted by Vogue. The venue, next to the Hotel Gansevoort in the city's Meatpacking district, boasted eco-friendly designer products from Christopher Raeburn, John Patrick and Rebecca Minkoff, and also had a panel discussion on sustainable fashion featuring the designers.

The automaker says its first-ever fashion report shows that nearly 70% of the Fashion’s Night Out community rates “eco-friendly” as an important attribute when purchasing a product.

Ford also had two dozen Fusions serving as shuttles to take people around town to other FNO events. Besides the sustainability and affordable-fashion connection, it probably made sense for Ford to be there because the Dearborn, Mich. company had hired former Donna Karan designer Anthony Prozzi to do the car's interior.

Prozzi, who was on hand to participate in the panel discussion, explained to Marketing Daily that the interior and exterior design teams had to step back and take some history lessons before drawing the vehicle. He relates that Ford Chief Designer Jay Mays told the teams to think about what design says about a given era.

"He said, 'guys, even before you sketch think about who this vehicle is for. Who's the 'protagonist'?” Prozzi says. “I want you to know who they are what their exposed to what makes something modern.' We looked at the time-line of design through the decades -- what happened in the 1900s, ‘20s, ‘30s, ‘40s, etc. -- to see, well how the synergies in one decade fueled the next. We looked for areas where history repeats itself."

For example, in another era of economic desperation -- the ‘30s -- there was a paradoxical flourishing of industrial design.

"It was a golden age of car design,” he said. “You had cars like Delahaye, DeSoto, and yet it was a time of economic blight."

He said this is a similar time.

"We are coming out of a recession,” Prozzi said. “People want an escape. How do we give people this experience that takes them away from the mundane of reality through shape and form? We wanted a vehicle that was not so much about being provocative but seductive."

On the panel, Prozzi said the designer's job is to figure out the perfect balance of art and commerce.

"You want something beautiful that also sells,” he said. “It's about accessibility. Ten years ago, who could dream that Martin Margiela would be at H&M? This idea that to have something that has luxury to it, without that premium price tag is really important."

"Vogue helped bring it together for us, so it's great to have their stamp of approval on everything," said Ford spokesperson Marisa Bradley. "There's no ad buy or marketing commitment as part of this -- it's just pure activation and sponsorship. Design and style are so high on consumers' radars now, and Fusion's design speaks volume about accessibility. Fashion's Night Out is about affordable fashion, and accessible style, so it's a perfect alignment for fusion."