For A Cause, Saucony Takes On Nike+ 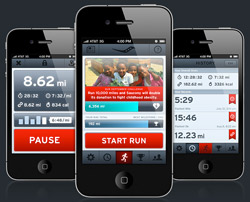 In an effort to raise awareness for both its running shoes and childhood obesity, Saucony is introducing Run4Good, a running app that allows users to raise funds as they log in the miles.

The app, designed by BEAM, Saucony’s digital agency, is intended to compete with pioneer Nike +, which has some 7 million members, and RunKeeper.

“First, we found lots of runners don’t really want all the bells and whistles that come with other apps,” Dave Batista, BEAM’s partner and executive creative director, tells Marketing Daily. “So we rallied around this core functionality, including pace, time, calories burned, and run and route history. Second, runners are very used to participating in 5 and 10K runs for a cause; it’s already part of their behavior. This app lets them generate contributions every time they run, not just in races. When we floated that value proposition, a simpler app and always supporting a cause, people told us they were willing to switch.”

Running is enjoying a renaissance, with more people running for fitness in the U.S. than ever. (Some 50 million people ran at least occasionally in 2011 -- a 7.3% increase from the prior year, according to the Sporting Goods Manufacturers Association, and 28 million ran at least 50 days, a 7.7% increase.) And as a group, runners are tech-crazy: Saucony says running apps are predicted to grow more than tenfold by 2016.

So far, the free app is being promoted on Saucony’s Web site, as well as a few specialty retailers, with Saucony’s goal of generating $10,000 per month. But Batista says the plan is to add sponsors, which will increase contribution levels, as well as marketing it to corporate HR departments, which can use the app to encourage fitness and sponsor corporate challenges. Depending on the response to this initial test phase, Saucony is also looking at some paid media to promote the app, he says.

Funds generated by the app, which claims to be the first to take aim at childhood obesity, are to be donated to the American Diabetes Association the first month, with other health organizations receiving donations in the future, including those nominated by app users. And runners get something too, earning discounts on Saucony products when mileage goals are attained.

Saucony, which is owned by Collective Brands, which also owns Sperry Top-sider, Keds and Stride Rite, is a market leader in the specialty running category, he says, competing with such brands as Brooks and ASICS.