Planet Fitness Pushes 'Pat On The Back' 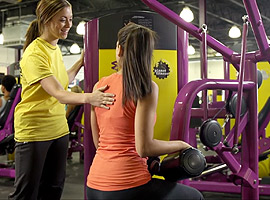 Sometimes all someone needs to exercise is a little encouragement.

Rather than talking about “getting ripped,” losing weight or other traditional gym messages, Planet Fitness, in a new national marketing campaign, is encouraging people to offer each other a little “pat on the back,” via Facebook.

“It’s difficult to tell our story without sounding like every other gym out there. This allows us to express our attitude, which is different than other gyms out there,” Eric Vaden, vice president of marketing at Planet Fitness, tells Marketing Daily. “We’re not your typical gym, posting pictures of [hard bodies]. We’re just normal human beings.”

The campaign traces its origins to the gym’s Judgment Free Zone, which allows members to relax, work out and have fun without having to feel pressure of having to impress others while exercising. Through the campaign, fans of the brand are encouraged via Facebook to send their friends a “pat on the back,” in the form of a pre-created message or by devising one of their own.

“We really love that notion of being judgment-free, but it’s hard to say ‘Go out and do that,’” Steve Red, president and chief creative officer at Red Tettemer, the Philadelphia agency behind the campaign’s creative, tells Marketing Daily. “We kind of thought about what the flip side of that was, which was offering nice encouragement. We wanted people to go out and offer a simple form of encouragement, and it seemed the pat on the back was the simplest way to do that.”

Many of the pre-conceived pats are intentionally not related to working out or exercising, Red says. Examples include: “Because your favorite color is glitter,” “Because you make up song lyrics” and “Because you went a week without repeating a pair of pants.” “There are some workout-centric pats-on-the-back,” Red says. “[But the campaign] is more about enjoying life and offering encouragement about every little thing. We want to drive encouragement throughout the world.”

Planet Fitness is promoting the “Pat on the Back Generator” (as it’s being called) via paid Facebook ads and Twitter, as well as through celebrity tweets and blogger outreach. The company has also posted a one-minute video on YouTube explaining the program. Once the campaign reaches 20,000 pat-on-the-back messages, it plans to celebrate by offering free cupcakes at its gyms nationwide.

Vaden admits there’s a certain irony to a health club promoting itself through a cupcake party, but adds that it’s just another thing that separates Planet Fitness from its competitors. “What I usually tell people is, ‘You’re going to eat a cupcake in a month. Would you rather eat it at home, where you might eat more than one? Or would you rather do it at the gym, where you can have a workout?”