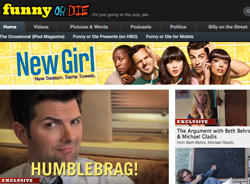 Turner is looking to capitalize on its investment in comedy site Funny or Die by using its talent and other assets to increase ad sales on TV networks such as TBS and Cartoon Network. The initiative will fall under a newly created sales entity Turner Branded Entertainment.

The group will be housed within Turner’s digital ad sales business. Ed Wise, a former sales executive at the Web site co-founded by Will Ferrell, will lead the group in a senior vice president’s role. He will look to opportunities to link the Funny or Die brand with Turner outlets, be it through branded entertainment or other avenues.

Earlier this year, Turner took a minority stake in the online humor site that has propagated some heavily viewed viral videos. One was a Ferrell-starring Super Bowl spot for Old Milwaukee that ran in a single small market.

Wise stated that he has worked with “some of the most extraordinary writers, directors, producers and talent in the entertainment industry." His new role offers a chance “to bring all of these resources and experiences to Turner to enhance advertising capabilities” in “creative, organic ways.”

Wise joined Turner this year after a four-year run at Funny Or Die, where advertisers such as Kia and Pepsi were involved with the site. He reports to Walker Jacobs, who heads Turner digital sales in New York.