Toyota Tundra Versus A Space Shuttle 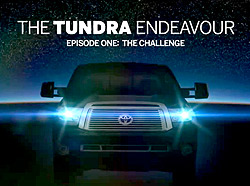 Can a pickup truck with a 10,000-pound towing capacity drag well over 300,000 pounds of cargo? Well, yes -- not at highway speed, or up and down big hills, but it can be done. And Toyota's Tundra pickup will do exactly that on Oct. 13. The cargo? The space shuttle Endeavour, which landed at LAX on Sept. 21 on the back of its 747 buzzard.

The Tundra will tow the Endeavour and its extremely heavy trailer and hitch assembly the last quarter mile of the 12-mile journey from the airport to the California Science Center in downtown L.A., where the shuttle will be on permanent display.

Toyota says the truck is an off-the-shelf stock 2012 Tundra CrewMax 1/2–ton pickup, identical to the ones at dealerships, and that it is not modifying the truck at all. The truck and shuttle will not, however, exceed escape velocity. Toyota Advertising Manager Russ Koble says it will reach about 2 mph.

The event, which Toyota is using both as a way to tout Tundra and to spotlight its partnership with the science center, is also a cause-marketing effort, per Koble, who tells Marketing Daily it is also meant to inspire kids to get into science and engineering, and promote the exhibits and programs at the center.

He points out that Toyota got the gig because of its long-time involvement with the center, which has a “Toyota Transportation Hall,” and for which Tundra is the official vehicle. The venue also features the truck in an exhibit on the power of leverage, where people can lift a Tundra by hand using only a three-point lever system. The Tundra pulling the space shuttle will replace the existing Tundra and will be on display after the Endeavour exhibit opens on Oct. 30.

The tow program was developed in partnership with Saatchi & Saatchi LA, which created a microsite, www.toyota.com/TundraEndeavour, housing videos, photos, activities for children and information about the Tundra Endeavour project. It includes footage on how engineers tested the truck to see if it could actually pull the load. The viewer gets a pretty good idea of just how heavy 300,000 pounds is, as the test involves several house-sized cement blocks on a trailer.

The program is tied to a social-media donation setup where Toyota will give $50 for every tweet it gets. The first video hints at the physical improbability of the whole "endeavor," as the viability test involved the Tundra having to tow 307,000 pounds of concrete blocks, flatbeds, trailers and gear.

Koble says Toyota is hoping to capture the event online, depending on whether technical issues can be negotiated. "We are in discussions about streaming the tow." The truck will be driven by Matt McBride, the professional driver who has been behind the wheel of the truck for TV spots that eschew CGI for ritual acts of automotive chutzpah and terror: one spot has him driving up a real tower through rings of fire, and playing a game of chicken with a cliff to demonstrate Tundra braking power. In a sense, the Endeavour program is an extension of all that.

"We want to show how capable a truck it is, and you can't really do that with CG." He says the Endeavour towing gambit also ties into another story to tell about the truck. "Tundra is the most American-made half-ton truck in the market; the only half-ton truck exclusively built in the U.S." The truck is built at Toyota's new plant in San Antonio.