This Holiday, Will Giving Get Social? 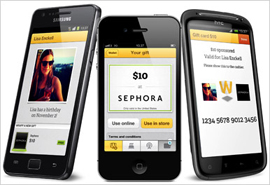 It’s beginning to look a lot like a social Christmas, everywhere we go. The big news, of course, continues to be Facebook, which said last week that it is rolling Facebook Gifts out across the U.S., offering everything from cupcakes to gift cards. (It’s the expansion of gifting app Karma, which it acquired last spring and, investors hope, an important revenue stream. Facebook will get an undisclosed percentage of everything it sells.)

But Facebook is hardly alone. In addition to putting it in direct competition with the likes of e-commerce giants Amazon and eBay, it’s also up against plenty of promising niche companies. Those include market leader and pioneer Wrapp, backed by the people behind Skype and LinkedIn, which has raised more than $10 million in funding; Treater, which has raised $2.5 million; and Boomerang, run by former Groupon execs, which has raised some $1 million.

Then there’s early favorite Gyft, which has Google Venture’s backing and is already working with 100 retailers, including Amazon. And don’t forget Walmart, which introduced its Shopycat just in time for last year’s holiday season.

“Think of it as the perfect intersection of three big trends,” says Louis Hatzis, founder and CEO of Tsoonami.com, which makes tools for merchants to monetize promotions. “Social gifting combines the popularity of gift cards, which is a $100 billion market, with social media and mobile technology.”

Theoretically, these work the same as gift cards, but better: There’s no need to mess around with stamps or tracking down snail mail addresses. Because they are electronic, they can't be accidentally tossed out with the wrapping paper on Dec. 26. “And since you are reaching someone through a social network, consumers are more apt to find gifts people will love,” he says.

And for marketers eager to find a way to make brands buzzworthy in the overcrowded world of social marketing, that love connection is essential.  “Wishing friends a happy birthday on Facebook is a low-effort, high reward way of staying connected,” Julie Bornstein, SVP of Sephora Digital, which uses Wrapp, tells Marketing Daily via email. “To stand out and take it to the next level for a good friend, adding a gift card through Wrapp is the perfect way to add some thoughtfulness into the post.”

It’s also an important way to monetize Sephora’s inherently social appeal. “Beauty is a natural fit with social because women have always connected through beauty. All women have a unique beauty point of view. We are able to track where traffic and clients come from on Sephora.com, so we know the power of our social sites like Facebook, Pinterest, and Twitter.  We also see a rapidly growing trend of clients socially sharing products they want or already love on social sites.”

Wrapp also works with such brands as Zappos, Levis, Office Depot and The Gap.

And while all that has been true for several years, what’s really powering it all, says Hatzis, is their phones. “Mobile is where everything will be.”

“We are all on our phones more than any other screen in our lives,” adds Bornstein. “It’s the ultimate convenience.”