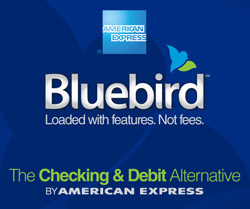 Walmart, which has long positioned itself as a champion of the “unbanked,” is launching Bluebird, a prepaid card in partnership with American Express.

It says it will begin selling $5 starter kits for the new cards, packaged in boxes, at checkouts and in its “Action Alley” next week. And a spokesperson for American Express tells Marketing Daily that the introduction will be supported with national TV ads, as well as online.

In a joint conference call, the companies say Bluebird is the result of 180-store pilot test begun last year, and that is a significant announcement for both companies.

“Bluebird is the best of prepaid cards, debit cards and checking accounts, and is really a first of a kind for American Express,” said Dan Schulman, group president, enterprise growth, American Express. Bluebird relies on the digital capabilities of America Express’ Serve platform, introduced 18 months ago.

The card has no minimum balance requirement, and can be used both as an ATM card and to pay bills. There is no credit check required, and each account comes with a free app that will allow people to use their smartphone to pay bills, make deposits with photo capture, set up alerts and manage accounts via mobile device. Funds never expire, and there is no fee for a lost or stolen card.

While there is a $2 fee for ATM use, members who make direct deposits will not pay any ATM fees. (Schulman says Bluebird can be used at a network of 22,000 ATMs, which is 35% bigger than its next closest competitor.)

Executives from both declined to explain how Walmart or American Express will make money on an essentially fee-less product, but say plans are in the works to expand offerings in the near future, include paper check-writing capabilities.

While some 25% of Americans are currently considered either under- or unbanked, both say the card is aimed at the millions more who are “unhappily banked,” and restless about the mounting fees many banks are now charging for basic checking fees.

Daniel Eckert, vice president of financial services for Walmart U.S., says consumers now pay an average of $259 per year for a basic checking account. He adds that the retailer will continue to offer its current prepaid debit cards, via its partnership with Green Dot.

“We want to expand our offerings, and give people more choices,” he says. “Our research told us that consumers wanted something that wasn’t out there. They want the best capabilities of payment industry, including technology, at a terrific value.”