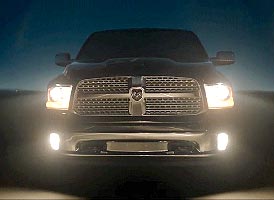 Chrysler’s Ram on Monday rolled out its second major national campaign since the company became a unique division of Chrysler LLC.

The campaign, “Moving Heaven and Earth,” uses computer-generated imagery to demonstrate how the pickup truck's capability can change the terrain, virtually. The campaign puts special focus on a new kind of shifter, a knurled rotary knob about the size of a radio-tuning dial. The campaign also stresses the vehicle's Uconnect telematics and its ability to go 25 miles per gallon.

Using the "Guts, Glory, Ram" tag, the TV ads break Oct. 12. The company says that in addition to a 60-second commercial, there will be four 30-second ads that follow.

The Hispanic version of the campaign, “A Todo, Con Todo” (“to everything, with everything”) was produced in both Spanish and English and features the award-winning Latin musician Juanes. The English language ads are voiced by actor Sam Rockwell, whom Ram used in the initial "Guts, Glory, Ram" campaign.

The CGI in the spots are meant to impart the idea that the truck has features that exert heavy-duty influence on the landscape and constellations and just about anything topographic the driver wants to change.

The anthem spot opens on a one-lane highway with the Ram 1500 driving at night under stars. When the driver uses the telematics interface to change SiriusXM stations, the constellations shift orientation.

To tout fuel economy, a huge schism appears on the road as the truck approaches, and a big segment of the country vanishes, pulling two cities closer together just as the truck crosses the fault line. The rotary shifter is demonstrated by the use of a hawk that freezes mid-flight and then changes course.

The voiceover states: “To take it all head-on ... shorten the distances, push beyond the possible, roar past convention, shift every course, defy the elements and bring the world to its knees…the road doesn’t end here. This is only the beginning. Guts. Glory. Ram.”

The company says the campaign, via Dallas-based The Richards Group, will run on professional and college football games, major league baseball playoff games, network and cable prime-time programming, as well as syndicated network and cable sports and outdoor lifestyle programs beginning this weekend.

The Hispanic campaign includes television, print and radio ads that will run regionally in the top-volume U.S. Hispanic markets for Ram trucks, per the company. The ads will be on networks like Telemundo and Univision; in national Hispanic magazines including Automundo and ESPN Deportes La Revista; and in Spanish-language local newspapers and radio stations in key Hispanic markets. The ads also will run on in-language Web sites.

The Hispanic campaign, via Richards/Lerma, has its own anthem spot with Juanes driving through a town, with the voiceover: “We all have our own set of challenges and to reach the big stage requires talent, desire, determination.” Juanes also will grace Ram digital ads. In addition to the TV spots, Juanes will be featured in “A Todo, Con Todo” digital advertising.

The Chrysler LLC division says it also will create custom media programs around Univision, Mexican regional music (Yahoo! En Espanol channel) and the Mexican Futbol soccer League, and that Ram is partnering with the Futbol de Primera radio network as the official partner and exclusive automaker in all World Cup broadcasts.