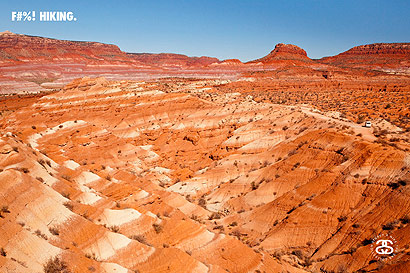 Nike may be having a magical marketing moment with its mainstream running shoes, but it looks like it hasn’t turned its back on its niche markets either. The company has just taken the wraps off its latest collaboration with cult skate brand Stüssy.

The two companies say this year’s pairing, dubbed S&S, “is about duality. It’s about snow and street. It’s about sand and street,” according to Nike’s release on the new line, available next week. “Stüssy and Nike represent different movements, both sub-cultural and physical -- one founded on surf and skate, the other rooted in athletics and innovation.”

Ads for the new line celebrate the ballsy tone of voice fans have come to expect, with taglines like “My posse’s off the mountain,” “Lighter than all y’all,” and “F#%! Hiking.” The two companies have been offering occasional shoe mash-ups since 2000, starting with a Nike base (which have included the Huarache and the Dunk) and adding Stüssy luxury, colors, or twists. This collaboration builds on the Nike Free, and “flips classic cues and future favorites effortlessly with premium materials that emphasize lightweight, rugged style.”

Separately, Nike says it is expanding its Nike+ FuelBand offering, with two new colors and distribution expanding across the U.S., Canada and the U.K. The company launched the product -- which links to Apple phones and iPad and measures activities, calories, and steps as well as time -- back in February.