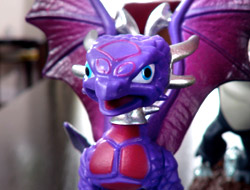 Having scored a hit with its cross-platform game Skylanders Spyro’s Adventure (in which gamers take certain “real world” toys and bring them to life through a video game) last year, Activision is going bigger -- literally -- with its latest Skylanders line extension and marketing effort.

In a new ad campaign for Skylanders Giants (which features larger toys), Los Angeles agency 72andSunny gives personality to the toys through voiceovers and interactions in real-life situations. Whereas last year’s campaign focused on showcasing the “boom moment” (through which kids put their characters on a special platform connected to the game),” this year’s campaign could develop more characteristics of the toys, says Michael Bryce, creative director of 72andSunny.

“The success from last year's game launch created great awareness, and going into this year's campaign most kids already knew about Skylanders and how they could bring their toys to life,” Bryce says. “This allowed us to focus on developing the character personalities of the toys and the relationship between the old Skylanders characters and the new characters. We did this by putting them in situations where they interacted with the real world and created more humor through their back-and-forth banter.”

New video advertising shows the characters (voiced by celebrities such as Adam Carolla, Bobcat Goldthwaite and Jim Cummings, the voice of Winnie the Pooh) watching a dog tear the head off a stuffed toy before turning its attention to them. “Oh, that’s not good,” says one. As the others fret, one takes command saying, “I’ve got this,” and orders the dog to sit. (The dog immediately obeys.) A second commercial features the toys fretting over an approaching turtle.

“This year, a major focus of the campaign was to amp up the entertainment and humor of these delightfully charming characters,” Bryce says. “Leveraging connections to Hollywood and casting some of entertainment’s most beloved and hilarious voices helped bring these characters to life.”