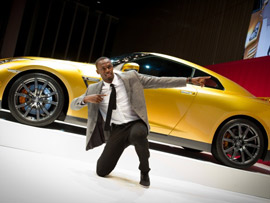 Olympic wonder Usain Bolt, the fastest human on Earth, is getting his name on a high-performance version of the Nissan GT-R.

Bolt, who appears in Nissan advertising, has signed a special deal with Nissan Motor Co., Ltd. to extend his role as brand ambassador for the 196-mph GT-R and to become honorary “Director of Excitement” for the company’s global marketing drive.

Nissan COO Toshiyuki Shiga unveiled a gold-painted GT-R that will be auctioned to benefit the Usain Bolt Foundation, which builds educational and cultural opportunities for children and young people in Jamaica, Bolt's home.

As part of Bolt’s partnership with Nissan, the sprinter today test-drove various GT-R models at the car company’s proving ground near Oppama, Japan, where his reaction times, acceleration and other handling capabilities will be used in developing a special “Bolt GT-R” for his personal use.

The company says Bolt will start work with Nissan product specialists on a limited-edition version that can be ordered in markets where GT-R is available. Bolt will also extend his marketing association around the “WHAT IF_” global brand campaign, which focuses on products and technologies. Creative runs on airport billboards. The campaign is a nod to the company's new long-term strategy called Power 88, whose goal is to grab 8% market share and 8% operating margins globally.

The company may well be heading in that direction as it is now the fastest-growing brand in the world in terms of share, and also got the nod from Interbrand's 2012 brand ranking as one of the "top risers" having risen 13 places on the prior-year report to rank 73rd in global brand value.

The company says TV commercials featuring the Nissan LEAF electric vehicle, called “What if you could drive the future, today?,” will also be aired via six major international TV networks starting this month.