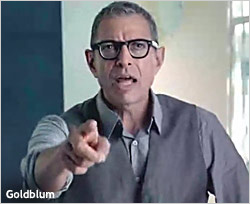 The four minimalist 30-second spots each simply feature Goldblum talking about the benefits of using PayPal for shopping both online and in stores.

The spots will air online through the end of the year on Hulu, AOL and Yahoo, and the videos will also be featured on eBay’s various Web properties.

Featuring his signature wit, Goldblum says in one video: “You want to move on with your life. You want to have lunch. You want to go take a tango lesson.”

The company aims to extend its reputation beyond being simply a mobile payment provider.

Anuj Nayar, PayPal’s senior director of global communications, explained the need for a re-education campaign in a blog post on PayPal’s Web site last week. “PayPal is expanding our core product to solve problems for consumers, merchants, developers and advertisers -- not just trying to re-create a wallet that we already invented 14 years ago,” he wrote.

In addition to the videos, PayPal has created a dedicated webpage for the campaign, which provides information on how users can make the most of PayPal, along with all four of the Goldblum videos. The page highlights how the service helps customers: Pay however you want; Pay anywhere; Pay simpler; and Pay safer.

The company is also planning in-store marketing efforts at several of the national brands that have partnered with PayPal, including Abercrombie & Fitch, Home Depot and Foot Locker.