For Most, Holiday Cheer = Food, Friends 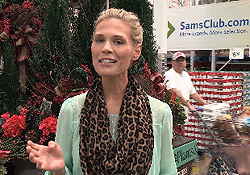 While the fourth quarter certainly ’tis the season for probing consumer spending, Sam’s Club recently fielded a study to get at the sentiment behind the shopping. And forget about dreading the fiscal cliff: Turns out that 79% of those in the survey are looking forward to this year’s holidays, even though 75% say the economy has an impact on their celebratory mood.

When pinned down to say what “cheer” means to them, 50% of the survey’s respondents choose dinner with family and friends as the best definition, while 35% say lights and decorations, and 8% say cheer means holiday movies and music, according to Sam’s, which is a division of Walmart.

The study also reports strong links between holiday preparedness and feeling good, with 87% of women citing readiness as a key factor in their enjoyment, and 74% of men.

Cheer ratings are highest among Hispanics, as well as families with children. And 51% say love is the main ingredient of cheer, while 40% claim to be the first to crank out cheer in their community, often by being the first one to decorate.

In addition to other holiday promotions, Sam’s will try to keep that cheer theme going, welcoming Black Friday shoppers with a free hot cup of Starbucks coffee and pastries. And it’s asking its 47 million members to use social media to share their cheeriest memories via Facebook, Twitter, Pinterest and Google+.

Special promotions include food and decorating experts offering tips in-store, online and via its mobile apps. Sam’s also says it is partnering with Off The Field Players Wives Association and the Salvation Army for the fifth year, offering shoppers opportunities to buy food and gifts for the needy inside its clubs.

JCPenney is also working the family angle, and says it is offering free family portraits through November. (The offer includes a free 8x10, as well as a digital version.)