Sir Richard's: Hello? Can We All Say 'Birth Control'? 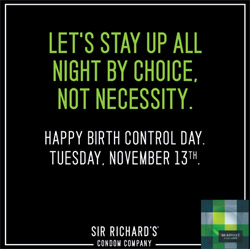 Ads for condoms are fairly predictable. An alien new to Earth who saw them might think condoms are something manufactured solely to increase sensitivity and pleasure. Why? There's not much traction in focusing on what they are really for.

One company, however, has created a humorous campaign that directly deals with condoms' raison d'être. Sir Richard’s Condoms has launched what it dubs a non-procreators’ holiday with a new online and social media campaign via advertising agency TDA_Boulder that might be thought of as a kind of anti-Mother's Day pitch.

Wading into this territory isn't new for the brand. Earlier this year, Sir Richard's responded to radio spewmeister Rush Limbaugh's attack on student Sandra Fluke by getting people to declare themselves sluts and proud of it.

The aim is to build awareness of birth control in general and Sir Richard’s position as an all-natural brand. The effort, housed at birthcontrolday.com, urges visitors to make Nov. 13 a celebration of the first annual Birth Control Day, "a holiday commemorating the responsible decision of choosing not to be a parent."

The agency chose Nov. 13 because feminist Margaret Sanger was arrested on that date in 1921 for trying to keep the New York City Police from closing down the nation’s first American Birth Control Conference, at the city’s Plaza Hotel. A riot followed.

The site, which pitches the prophylactic as all-natural without spermicide, parabens and glycerin, goes on to say that while the brand "has nothing against parents, or even children for that matter, we encourage you and your significant other to celebrate the ability to fornicate to your heart’s content without procreating."

Housed on the Web site is a social media program centered on 12 digital “Happy Birth Control Day” cards with ironic messages that visitors can disseminate (no pun intended) via Facebook, Twitter, Pinterest or email. Sample messages include “Let’s not make the same mistake our parents did,” “I’d rather not remember we slept together in 9 months,” “You had me at ‘condoms’,” and “Let’s change positions, not diapers.” Each card links back to the microsite, and the microsite links to Sir Richard’s home page. For each condom the company sells, one is donated in a developing country.

Jonathan Schoenberg, executive creative director at TDA_Boulder, which founded Sir Richard's -- also based in Boulder -- with equity partners, tells Marketing Daily that the agency considered ways of getting out the concept that birth control is not taboo. It tested the finished creative and found it also resonated with women, 50% of whom buy condoms. "I showed the campaign to a focus group of 100 people two days ago and women loved it; other brands tend to be very masculine."

Schoenberg says the campaign is also timed with a big increase in national distribution that takes Sir Richard's from being a very niche brand to a potential force in the segment. "In December we came to market in terms of real distribution. We have taken a major foothold in the natural channel via stores like Whole Foods over the last nine months, and now we're mainstream: we are now on Target.com and are having conversations with major pharmacies." He adds that the condoms are now at some 1,500 natural-products stores, some 900 universities, and convenience stores.

Schoenberg says that with the expanded retail footprint will come bigger marketing. "In 2013 we will have big initiatives. Until now it's been pixels and getting people’s attention."