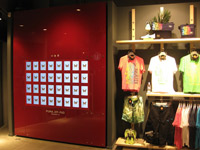 When it comes to incorporating technology -- including mobile -- into marketing, Puma takes inspiration from Willy Wonka. According to Adam Petrick, senior global head of brand management at Puma, the fictional chocolatier showed that using technology should flow from a company’s brand, which in the case of both Puma and Wonka, is about providing “surprise” and “joy.”

In short, Puma employs technology that reflects its brand identity as a fun, style-savvy challenger to heavyweight sports gear rivals Nike and Adidas. “We do make technology items, whether soccer boots or running shoes, but utilizing the mobile channel in a bleeding-edge capacity, it’s not necessarily right for our brand,” Petrick told the audience at the ANA Mobile conference in New York on Wednesday.

During his presentation, he highlighted a few of the ways Puma is embracing mobile and other technologies at retail to engage customers and extend its brand message.

The best known is the wall of iPads, or “Puma Joy Pad,” which the company unveiled last year at select stores globally. It consists of 32-interconnected iPads mounted on a wall to offer an immersive media experience. The iPad wall’s touch display allow shoppers to interact with the screens including play games.

Another novelty item is what Puma calls its “peep show,” wall-mounted boxes in dressing rooms that show various video images -- a hamster, a disco ball, a person -- when the door is opened. The company has also begun using iPads to let consumers customize their own shoes.

“Why do we do this stuff? It is our responsibility as a brand to be a challenger brand, to be irreverent, to be different from everybody else out there,” said Petrick. Maybe that's why Puma hasn’t jumped on the QR code bandwagon. While the company has experimented with QR codes in stores, mainly in Europe, Petrick didn’t voice much support for the technology as a direct shopping tool.

“You want to go in and feel the piece you’re buying, and want to have the tactile experience and pleasure of getting to purchase something and take it home,” he said. “For Puma as a brand, that wasn’t the right kind of use of technology for us.” But he suggested it could just take more time to determine how best to use QR codes.

In the social media realm, Petrick said Puma has found particular success with Instagram, simply by taking pictures of new Puma shoes he and others are wearing and posting them to the photo-sharing app. He noted that when the company posts images or information about new products on social properties, engagement is much higher than posts about new marketing campaigns.

“That’s why I think we’ve had success with Instagram, with this low-tech way of using the platform,” he said. That’s also a low-cost approach. Petrick noted that Puma does almost no tech development in-house and has no specific budget allocation for mobile. Spending level “depends on the project and what the context is,” he said.