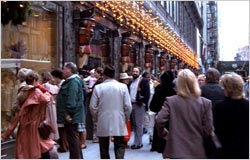 The big news is that Americans headed into the holidays in record numbers last weekend, with 247 million shoppers going to stores and Web sites during Thanksgiving weekend. That translates into a 6% increase in unique shoppers from last year, says the National Retail Federation, with spending reaching $59.1 billion, up 12% from last year. Apparel and gift cards (apparently not just for last-minute shoppers) were the most-often purchased items. And 80% of shoppers also bought non-gift-related items.

But the bigger news, for consumers and retailers alike, is a brand new kind of marketing convergence, whereby Thanksgiving Day doorbusters ate Black Friday, and constant online specials devoured Cyber Monday. And both tablet and mobile sales are snacking away at in-store and online purchases, creating a blur of buying. “Black Friday has become a five-day weekend. Every day is Cyber Monday, and every day is Black Friday,” says Matthew Shay, National Retail Federation president and CEO, in a conference call detailing the results. “It’s become a distinction without a difference.”

“This was a huge win for retailers,” he says, “with more people shopping every single day of the weekend.”

It was also a triumphant moment for online and multichannel stores: For the first time, more people shopped online than at such discount stores as Walmart and Target. As a result of such strong “couch commerce, our members are very bullish about Cyber Monday.” Many retailers have held back special promotions to spur Cyber Monday shopping, “and consumers are smart enough to know those are worth waiting for.”

And despite scattered protests and cranky traditionalists, shopping on Thanksgiving Day itself appears to a big hit -- with the NRF survey conducted by BIGInsight reporting that 28% of the weekend’s shoppers hit stores by midnight, up from 24.4% last year.

What’s more, “buying on Thanksgiving was much steadier than it was last year,” says Ramesh Swamy, a senior leader for Deloitte’s retail and distribution practice, who started prowling West Coast malls at 6 a.m. Thanksgiving morning. “And the earlier openings have changed the dynamics. Last year, I saw mostly younger people. But with this year’s earlier openings, I saw many more families shopping together. And overall, stores were much better prepared for Thanksgiving Day, and doing a much better job executing their specials.”