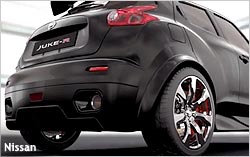 Nissan's European operations has done some offbeat things with its offbeat performance car, Nismo Juke-R, like racing on the streets of Dubai against a sheik and his Ferraris. The company has also based an entire marketing program around gaming, with the Nissan GT Academy, via a partnership with Sony Computer Entertainment. As part of that program, which is in its fourth season, really good players of Gran Turismo go to a Hell Week-style racing camp in the U.K. to vie to be a Nissan professional racer.

The company is back with another gaming campaign that gives people who have a knack for the digital racetrack a chance to drive the Juke on a real one. To promote the launch of the latest version of the car, which goes on sale early next year, the alliance with game maker Gameloft's Asphalt 7: Heat aims to find the 10 best mobile Nismo drivers and give them a VIP trip to drive the car in Barcelona.

The game features the Nissan Juke Nismo, and Juke-R. Part of the deal is a free release download for 48 hours on Dec. 8 and 9 in the App Store, per Nissan. One of the virtual courses in the game is on a Nissan racetrack, in Tokyo, which features a section where drivers pass the Nismo Omori factory, per the automaker.

The company says the game has been downloaded by 50 million people for iOS and Android, and to enter, players must first register their details via an app on the Gameloft Facebook page or through the game and then drive a Nissan Juke Nismo in the Asphalt Academy game mode. A leaderboard records the times of the fastest drivers. The competition runs from Dec. 17 to 31, at which point two winners will be selected at random (one iOS and one Android) from the top 10. The effort will be done in the UK, Spain, Germany, France, and Russia.