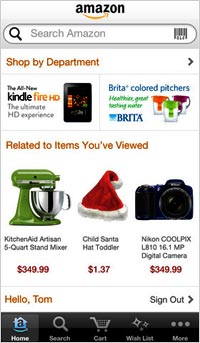 Internet-retail giant Amazon remains at the head of the class, according to the 8th annual report, which is based on more than 24,000 customer surveys collected during the prime holiday shopping season between Thanksgiving and Christmas.

This year, the study expands from measuring satisfaction with 40 top retailers to 100. Aggregate customer satisfaction has stagnated, scoring 78 on a 100-point scale.

Although satisfaction with top retailers remains the same, a few big-name retailers suffered declines. Apple’s online retail store slides 4% to 80, slipping from a tie for second place and out of the top five entirely, registering its lowest score in four years. PC competitor Dell.com also falls 4% to 77 and below the Index average. But the biggest year-over-year decline goes to jcpenney.com, with a 6% decline to 78.

“This year, we’re seeing that even some of the largest companies in the country are at risk if they lose sight of customer satisfaction,” said Larry Freed, ForeSee president and CEO, in a release. “Satisfaction with the customer experience, when measured correctly, is the most important predictor of future success, and while Amazon clearly gets it, Apple stumbles from their usual focus on the customer experience. Dell and J.C. Penney seem to be struggling to find their way, which could make them extremely vulnerable to competitors.”

Meanwhile, Amazon.com continues to set the standard for customer satisfaction, matching the record high of 88 it set last year in the holiday edition of the Index. Amazon has had the highest scores in the Index for eight years in a row, consistently setting a pace that other retailers don’t seem to be able to touch. Their high score is partially the result of the appeal and variety of merchandise they offer, a priority area for some other retailers.

“At this point, Amazon has been dominant for so long and has such a history of focusing on the customer, it’s hard to imagine anyone else coming close,” added Freed. “Companies should emulate Amazon’s focus on the customer, which is clearly linked to superior revenues over the years.”

The range of scores among the top 100 retailers spans from Amazon’s high of 88 to a score of 72 shared by Gilt.com and Fingerhut.com.

Merchandise is a top priority for two-thirds of retailers. Customer experience analytics can provide retailers with a clear direction on prioritizing improvements that will have the greatest return on investment.

While many retailers are focused on price, only seven of the top 100 companies registered price as a high priority for improvement. However, 65 of the measured sites should improve merchandise (the appeal, variety, and availability of products) in order to increase overall satisfaction, and by extension, sales, loyalty and customer recommendations.

Furthermore, analysis of top e-retailers in the United States has shown that, on average, a one-point change in Web site satisfaction was found to predict a 14% change in the log of revenues generated on the Web.