For Target And Kohl's, Ho-Hum Holidays 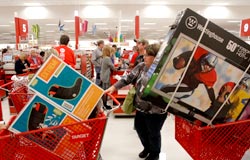 While overall sales at the nation’s largest retailers made solid gains in December, a few stores didn’t have much to carol about.

At Target, sales were a disappointment, with flat same-store numbers. “December sales were slightly below our expectations, as strong results late in the month did not completely offset softness in the first three weeks," says Gregg Steinhafel, its CEO, in a release. "Similar to November, profitability for December benefited from our continued focus on achieving an appropriate balance between price investments and driving sales, combined with thoughtful inventory.”

And at Kohl’s, while comparable-store sales gained 3.4% for December, gains for the combined November/December period actually fell a bit, declining 0.3%. “December sales were lower than planned,” says Kevin Mansell, CEO of the chain. “Additionally, sales came late in the holiday shopping season, and as a result, were at deeper discounts than planned. We are taking the necessary markdowns in the fourth quarter to manage our inventory as we transition into the spring season.” As a result, the company lowered its earnings forecast.

Better news came from Macy’s, which says its December sales gained 4.1%. “Last month was our fourth consecutive December with same-store sales growth, which is indicative of the sustainability of our key business strategies,” chairman/CEO Terry J. Lundgren says in its announcement, but adds that “the rate of growth was somewhat less than we had expected in the first two months of the fourth quarter.”

And at the Gap, same-store sales for December grew by 5%, with gains in each of its Gap, Banana Republic and Old Navy brands.

Overall, the International Council of Shopping Centers says its retail sales index registered a 4.5% gain for the month, in line with its earlier forecasts and well above the 1.7% gain in November.