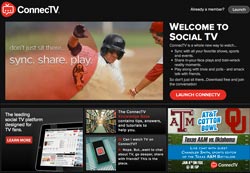 ConnecTV, one of the companies looking to facilitate second-screen opportunities, has an arrangement allowing station groups to sell what amounts to interactive advertising in local markets.

With technology that can sync ads on-air with activity on mobile platforms, a spot could direct a viewer to make an immediate purchase or pursue a special offer via a tablet or smartphone.

ConnecTV is billing the service as a TV advertising network. It will sell ads, along with nine large station groups, including Belo, Hearst and Gannett, covering 250 network affiliates. ConnecTV was founded in 2010 with funding from station owners.

The Ad Sync Network also features a “Google-like” TV Words offering, where a specific word on-air can prompt mobile advertising activity. Advertisers “can create new inventory that is completely contextual and relevant to what a viewer is watching in real-time,” according to ConnecTV.

ConnecTV is launching a “charter” program to entice marketers to join a launch phase, allowing heightened roles in second-screen research and a chance to “prioritize” TV Words.

Viewers reachable must have downloaded ConnecTV’s app or synced up via a “syndication partner.”

Pat LaPlatney, a vice president at Raycom Media, stated that the platform allows “viewers the ability to act on the ads that are most relevant to them. In the market for a new car? Schedule a test drive at your local dealer while you’re watching the ad. A promo for a news story catch your interest? Add your local news to your Watch List for an instant tune-in alert on ConnecTV.”