GQ Names Mail Online Publisher One Of 'Most Influential' 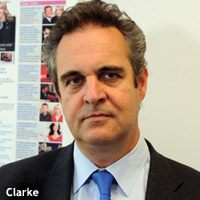 The February British edition of GQ has named Martin Clarke, the editor of Mail Online, the world’s biggest online newspaper, as one of their "100 Most Influential Men in Britain", according to the magazine. He is at the top of the list of digital personalities.

Clarke is cited for having "overseen the Mail Online’s rise to become the world’s biggest online newspaper with monthly unique browsers in excess of 112 million at the end of 2012. ... The ongoing growth in popularity of the website, which also incorporates stories from the Daily Mail newspaper, is stronger than all its national and international newspaper rivals. It has added a third more unique monthly browsers, some 27 million, since November 2011."

Clarke rejoined DMGT in 2001 as Editor of the newly acquired Ireland on Sunday (now The Irish Mail on Sunday). In 2005 he was appointed Executive Editor of The Mail on Sunday, where he launched Live magazine. He was launch Editor of both the Standard Lite and London Lite. Clarke became responsible for Mail Online in 2006 and was appointed Publisher in 2008.