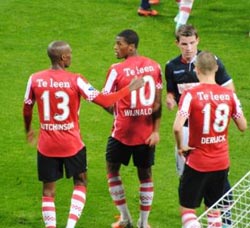 A new promotion around a European soccer team – Netherlands-based PSV Eindhoven -- goes way beyond dangling jerseys, branded caps and gear. In an effort to align with the marketing theme of the team's major sponsor, credit company Freo, the promotion offers 100 PSV items, many of them human, which potentially raises all kinds of issues. On loan are team manager Dick Advocaat, captain Mark van Bommel, Jetro Willems’ socks, Phoxy the mascot, the PSV Eindhoven’s Philip’s Stadium itself, the team bus, players’ kit, cars, masseur, the UEFA Cup, VIP suites, a whistle, and even a ballboy (hopefully having reached age of consent).

The effort, "Freo Loan League," touting the brand whose name is on PSV jerseys, is via Havas Worldwide Amsterdam and MediaMonks Amsterdam. The effort is meant to reward the team's 1.4 million fans by giving them the chance to borrow the people and items.

The effort kicked off on Oct. 20 during PSV’s match with Willem II Tilburg and runs until the end of the season in May. Assets are online at www.gekvanpsv.nl, where visitors can tour a virtual PSV stadium, searching the “ground” for items they want to borrow, then click to claim it. To be awarded the object, the fan must leave a message on the GekvanPSV.nl page saying why they should be lent the item. A panel comprising PSV players and representatives from Freo and Havas judge submissions.

An interesting, if extreme, element is that advertising on players' jerseys during matches, noting that they are "For Hire" (“Te Leen” in Dutch), supports the effort. And there are stickers on the actual objects in the stadium that say, "On loan, borrow your piece of PSV." A release says there are also Facebook Ads, Z-Cards distributed at home matches, print ads in PSV media, stadium TV commercials, perimeter boards, and outdoor advertising across the city of Eindhoven.

Said Coert Buiting, art director at Havas Worldwide Amsterdam, in a release, “Usually, football sponsors focus on name awareness and sales. ‘The Freo Loan League’ is a money-can’t-buy, once in a lifetime opportunity that gives something back to the fans, for free”.

Wesley ter Haar, MediaMonks Amsterdam, added, “The online platform enables PSV Eindhoven supporters to prove how much they care about the club. The interactive experience enables fans to think about Freo in a different way and share their passion for PSV on Facebook”. The release says that the campaign is meant to mirror the Freo brand positioning around making dreams possible, and making the impossible possible.