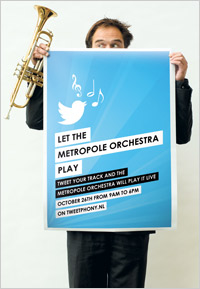 With its funding and very existence threatened, the Metropole Orchestra in the Netherlands is turning to social media for a lifeline.

But rather than asking supporters to tweet (and retweet) their support for the organization in hopes of getting politicians to devote more funding, the group is using Twitter to create an original composition.

“Almost every citizen of the Netherlands has a connection with the Metropole -- they hear the music of the Orchestra every day, often without even noticing (for example, starting tunes of TV programmes and radio shows),” writes a representative for the Metropole in response to questions from Online Media Daily Europe. “There is no arts company who reach more of the population than the Metropole. They are not only a world class orchestra, they also deliver the highest return on investment for the subsidy they receive.”

The campaign (created in association with Havas Worldwide Amsterdam and Perfect Fools) encourages social media users to create tweets based on the letters associated with musical notes. The organizations created a special campaign site that uses a digital piano interface so composers can hear their tweets as music. Once the composer is satisfied with their creation, they can tweet a link for others to follow and listen to the piece.

On Oct. 26, the Metropole Orchestra will string many of the tweets together into a full-fledged “Tweetphony.” Creators of the tweets selected for performance will be rewarded with a short online video of the orchestra playing their video via YouTube. The orchestra will also be showing a live stream of the event on Oct. 26.

To encourage even more participation, the Metropole Orchestra has enlisted well-known Dutch artists Alain Clark and Edwin Evers to submit their own compositions via Twitter to be included in the Tweetphony.