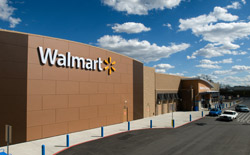 In what amounts to a ginormous hug for some of its most devoted customers, Walmart says it intends to hire 100,000 veterans in the next five years. And starting on Memorial Day, it is promising a job to any honorably discharged veteran in the first year off active duty.

The move, which also included a sweeping commitment to increase domestic sourcing of its products, was announced at the National Retail Federation’s Big Show, the retail industry’s most visible event, in New York.

Meanwhile, just 70 miles away, gun violence survivors and consumer watchdogs are staging a protest at a Danbury, Conn., Walmart, asking that it, the country’s largest gun retailer, stop the sale of assault weapons and munitions in stores nationwide. (Danbury is next door to Newtown, which is still reeling from last month’s fatal shooting of 26 people at the Sandy Hook Elementary School.)

So far, some 300,000 concerned people have signed a petition demanding that the Bentonville, Ark.-based retailer stop selling assault weapons, according to a press release put out by the protest organizers, which include SumOfUs.org, a global corporate watchdog, as well as SignOn.org, MomsRising, Courage Campaign, and Change.org.

The announcement about hiring veterans “is good PR for Walmart,” Robert Passikoff, founder and president marketing consultancy Brand Keys, tells Marketing Daily. “And when it comes to addressing these gun protests, it doesn’t have a lot of options.

“Without putting anyone in a demographic box, its core customers are more likely to be veterans, as well as rural areas, and they are more likely to be gun owners. And while no one thinks what happened in Newtown was anything but evil, that doesn’t mean they will stop shopping at Walmart,” he says.

Walmart’s announcement, made in a speech by Bill Simon, its president and CEO, also included a commitment to help part-time sales people find their way to move toward full-time work, if they want to, “and bring more transparency to our scheduling system so part-time workers can choose more hours for themselves.”

In order to deliver more “Made in the U.S.A.” merchandise, it is promising to buy an additional $50 billion in U.S. products over the next 10 years, including initiatives to bring the manufacturer of textiles, and furniture, and higher-end appliances back home.

The move addresses two of the biggest trouble spots the chain has faced in recent years: Poor treatment of its associates, including class-action sex-discrimination cases, and the perception that it sells shoddy imports, especially from China.

In a statement, Matthew Shay, CEO of the NRF, calls the Walmart move “nothing short of visionary,” as was its challenge to other retailers to follow its lead, pointing out that retailers now provide more than one in four jobs in the U.S. Walmart says it will work with the White House, including its Joining Forces initiative, to help boost veteran hiring.

Meanwhile, Passikoff says he expects gun-control groups to continue protests, as well as pressure legislators: “It’s the only two tools available -- people can vote at the polls, or at the cash register.”