Mercedes-Benz: The Devil And The Big Easy 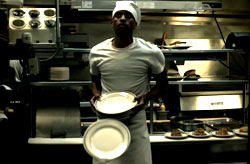 The Super Bowl is in Mercedes-Benz’ house this year. But the automaker is also running a 60-second spot in the fourth quarter of the game, and that spot got teased on Jan. 20 during the AFC Title game between the Baltimore Ravens and the Patriots on Fox. The spots don’t just tease the Super Bowl ad, but also offer a hint of the new CLA-Class vehicles getting spotlighted, or gaslighted -- since the Super Bowl is in New Orleans, after all.

Actually, the verb "to gaslight" (drive someone crazy by manipulating their sense of reality) is apropos of the creative. In the teaser, the car blows into New Orleans, blasting open the door of a French Quarter bistro (the Napoleon House), making peoples' jaws -- and at least one waiter's flatware -- drop as if they've seen Methuselah himself. Coffee boils in a cup, a thermometer spikes, and the jukebox sputters and then begins playing the Rolling Stones' "Sympathy for the Devil." The tag: "The Best or Nothing."

During Sunday’s AFC Championship, the automaker aired four 15-second and one 30-second version of the teaser. Bernie Glaser, Mercedes-Benz U.S.A.’s VP marketing, tells Marketing Daily that the ads will also run on Mercedes-Benz’s social media platform, and that the automaker will also run full-page print set executions in ESPN Magazine on Jan. 24 and USA Today in early February. Glaser says that this week, there will be a behind-the-scenes online spot hitting the Web.

Indeed, the new creative that is positing the CLA-Class as something with a more impetuous, aggressive, even dangerous personality, is clearly intended for a younger, if daring driver -- one who wants entrance to the premium segment. It's also a totally new approach for Mercedes-Benz, whose marketing has traditionally cleaved to the prescribed ways of luxury: ads that make no bones about the virtue of keeping an imperious distance from the lower beings, with smooth voiceover, cross shots of the vehicle in question cruising a sylvan landscape, and restrained expressions of automotive pleasure on the faces of affluent, serene, 40-somethings. And yes, Mercedes-Benz has done ads for high-performance cars like the rarefied SLS Gullwing, but there's still a certain circumspect restraint leaving no doubt that this toy is not for mortals.

"The CLA lets us open Mercedes-Benz to a totally new audience," says Glaser. "It's our new gateway car; it's a very seductive design, very sporty and aggressive, and it's for a younger audience -- and the young at heart.” He adds that the automaker is reaching out to 30- to-40-year-olds, “so the CLA and the Super Bowl is a perfect combination." Glaser says that in December Mercedes-Benz began to activate in New Orleans with outdoor executions, such as one billboard reading “One Temptation No Saint Can Resist.”

The automaker is also doing a lot on the ground in the Crescent City to support its position. In addition to a raft of cause efforts, Mercedes-Benz will host GQ and ESPN parties that put the new CLA on display. And on Super Bowl Sunday, Mercedes will host a tailgate party for invited guests and hundreds of dealers. And then there's signage inside the Mercedes-Benz Super Dome -- which Glaser says will be pretty much everywhere, including the Gate C main entrance, with a massive picture of the new CLA.