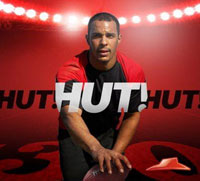 Pizza Hut is expanding its “Hut. Hut. Hut.” Super Bowl campaign by offering all Americans a free sample of its latest “product innovation” -- assuming one of the quarterbacks yells “hut” during the game.

That is, of course, extremely likely. (“Hut” is heard an average of 90 times per football game, according to a Stats, Inc. statistic cited by Pizza Hut.)

If the “hut” comes through, consumers can pick up their free samples (through carry-out or dine-in) at any of Pizza Hut’s 6,200-plus U.S. locations between 4 pm and 7 pm on Tuesday, Feb. 5 (no registration or membership required).

The nature of the new product will be revealed during CBS’s pre-game show (integrated into the content). Pizza Hut is one of the show’s official sponsors.

Meanwhile, the QSR is promoting this latest twist through its social media presences (including Facebook, Twitter, Instagram) and through media relations outreach, reports Doug Terfehr, director of public relations for Pizza Hut.

Additionally, the chain announced that fans will be able to earn chances to win other prizes by following the action on Twitter during the game using the hashtag #PizzaHUT.

These new promotions follow on the campaign’s now-closed social/UGC competition, in which consumers could submit (between Dec. 10 and Jan. 20) creative 15-second videos that included someone saying “hut” through the pizza chain’s Facebook page, for a chance to have their clips chosen to be included in a TV spot to air immediately before the Super Bowl’s kick-off.

According to its Facebook page, Pizza Hut has already chosen the winning video clips (18 clips featuring 56 fans will be in the commercial). The nearly 500 videos submitted are viewable in a gallery on the Facebook page.

Pizza Hut estimates that it will sell more than 2 million pizzas and 5 million wings on Super Bowl day this year.

The Martin Agency handled creative for the UGC TV spot, while Zeno Group is handling PR and social media for the Super Bowl efforts, according to Terfehr.

The Super Bowl efforts are part of a broader campaign launched last April, based on Pizza Hut’s helping its fans have “Make it Great” moments throughout the year.