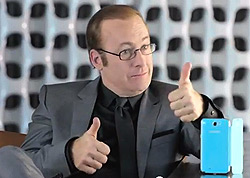 Tired of unauthorized marketers calling the Super Bowl “the big game”? So, it seems, is Samsung.

In a preview to an ad scheduled to appear during the football game to be played Sunday between the NFC and AFC champions, Samsung Mobile has released an online preview video in which Hollywood A-list stars Seth Rogen and Paul Rudd work to create an ad for “the big game.”

In the video, Rogen and Rudd sit at a conference table and are cautioned by a third party (played by Bob Odenkirk, best known as shifty lawyer Saul on “Breaking Bad”), who shuts them down every time the two stars try to utter the words “Super Bowl” or any other trademarked term. (“We might get sued [by] everyone. No one. Who knows?” he says.) They are allowed to say “Super,” but not “Bowl” in close proximity to each other. (At one point, Odenkirk encourages them to call the event “El Plato Supreme,” prompting the duo to incredulously wonder, “The Big Plate?”) Rudd and Rogen are also not allowed to identify the two teams playing for the championship, instead settling on the “San Francisco 50 minus Ones” and the “Baltimore black birds.”

The video has been released to Samsung’s social communities as a preview for the brand’s two-minute ad airing during the Super Bowl. After the game, the brand will release more footage and an extended version of the spot, as well as a Twitter contest for fans to win prizes by using the hashtag #TheNextBigThing.

Samsung made its first appearance on the Super Bowl last year, with an ad that parodied Apple acolytes waiting in line for a phone that paled in comparison to Samsung’s Galaxy series phones. That ad won the Twitter Ad Scrimmage last year, a contest among 30 brands and 42 commercials, and helped Samsung Mobile’s perception as a technology leader and challenger to Apple in the smartphone and tablet categories.

"The anticipation of Super Bowl ads creates a unique consumer experience,” said Todd Pendleton, chief marketing officer of Samsung Mobile, in a release. "'The Next Big Thing' campaign has allowed us the flexibility to tap into significant cultural moments and relevant conversations while showcasing our innovation."

Representatives from Samsung Mobile and its agency, 72andSunny, were unavailable to comment.