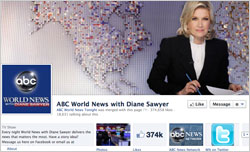 Where do consumers place their loyalty when it comes to entertainment brands? ABC, the NFL, and video game "Call of Duty" draw the biggest votes.

Some 24 brands were tracked in the research company's TV news, spectator sports, and entertainment categories. These "emotional engagement values" relate a brand with consumers' personal connection.

For the evening news category after ABC came NBC, Fox News, CBS and a fifth-place tie between CNN and MSNBC.

For sports leagues, after the NFL, comes Major League Baseball, NBA and the NHL. The gaming category contenders after "Call of Duty" included "Halo," "Madden Football" and "NBA 2K 12" (in a tie for third place), "Battlefield," "FIFA" and "World of Warcraft" (tied for sixth), "Starcraft 2" and "Crysis."

Robert Passikoff, president of Brand Keys, stated: “Consumers in those categories have, as they’ve done for nearly 20 years via our emotional and predictive metrics, indicated that their expectations regarding ‘brand’ have again increased."