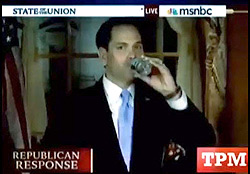 As of early morning Feb. 14, the day after the SOTU broadcast, MSNBC had shown a replay of Rubio’s Poland Spring lurch-and-swig about 155 times (including 101 times during “The Rachel Maddow Show,” which played the clip on a loop at the boom of the screen for more than 13 minutes), reported TheDailyCaller.com.

In addition, CNN aired the clip 34 times between 5 a.m. and 11 p.m. EST on Feb. 14. (Fox News, which attacked rivals MSNBC and CNN for being “obsessed” with the “water-gate” moment, logged a relatively tepid 12 replays during the same period.)

How did all of these affect consumer perception of the Nestlé Waters North America brand?

According to YouGov’s BrandIndex, which tracks brand perceptions over social and other media on a daily basis, the incident yielded relatively small rises in brand awareness and “buzz” for Poland Spring during the first two days following the broadcast.

The brand’s BrandIndex “Buzz” score -- reflecting response to the question "If you've heard anything about the brand in the last two weeks, through advertising, news or word of mouth, was it positive or negative?" -- rose just two points over the two days.