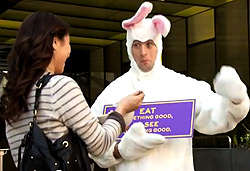 Maker of organic food and snacks, marketed under the tagline, “We make good,” Annie’s is conducting a social media experiment to see how far good can really go.

The year-long effort to spread good deeds, words and ideas began this week with an online video created by twofifteenmcann in San Francisco. In the video, shot over one day in Los Angeles earlier this year, a woman encounters a display encouraging her to tweet the hashtag #sharegood to “get something good.”

Once she does, a series of escalating events occurs each time she does something good. (For instance, a man in a bunny suit -- the brand’s mascot is a rabbit -- jumps out of a hidden area with a bowl of Annie’s mac and cheese, encouraging her to eat it. Upon eating, a group of magicians come out to perform street theater. Finally, the woman is encouraged to shout “Something Good!” which reveals an impromptu music performance from the back of a truck.)

Viewers are encouraged to “Share something good to get something good.” When one shares the video via Facebook, the viewer receives a “thank you” in the form of a video featuring a talking rabbit. While Bird would not share the company’s internal goals for sharing, Bird says she will be looking at how far the conversation goes, while having Annie’s associated with doing good.

“It’s going to be fun to watch. We’ve never done anything like this before,” she says. “The whole idea of ‘Let’s make something good’ is something we want to plant a flag on.”