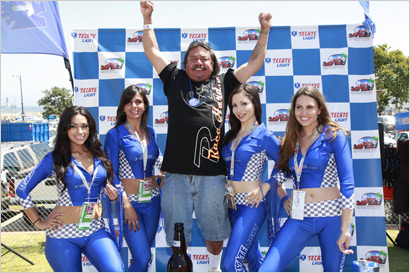 Tecate is in its 12th year as the “Official Malt Beverage Sponsor” of the Toyota Grand Prix of Long Beach, scheduled for the weekend of April 20. It's a local SoCal event, but it says a lot about where the Mexican cerveza is heading tactically -- a shift toward marketing to the growing demo of younger, bicultural Hispanic Americans.

To spotlight Tecate Light and its new Tecate Michelada lime-and-spice-infused beer, the brand will have a number of elements leading up to and at the event. Tecate will sponsor performances by Latin techno-pop group Moenia, Mexican metal rock phenom Moderatto, and the Miss Tecate Light Toyota Grand Prix of Long Beach competition. There are also retail sweepstakes in California and Nevada leading up for a chance to win things like a VIP racing experience.

Felix Palau, VP of marketing for Tecate, says the race brings in around 150,000 fans for the whole weekend. "And it has become a lot more relevant for Hispanics." He says in 2007 attendance was around 7% Hispanic, last year it was up to around 30%.

The company had a major change in marketing focus last year, from first-generation Mexican-Americans to younger second-  and third-generation Latinos who identify themselves as bicultural. "The focus of our 'Con Caracter' campaign had been Mexican newcomers, but when you look at composition of Hispanic-American consumers now, this demographic constitutes 10% of the population. So we weren't targeting the other 90%." Early last year the brewer's parent, Heineken USA, shifted advertising from Kirshenbaum Bond Senecal & Partners' U.S. Hispanic unit Ramona to its Mexican agency, Olabuenaga Chemistri, which did Spanish-language ads both for Mexico and the U.S. That was a cost-efficiency move, but Palau notes that it didn't quite work for bicultural Hispanics in the U.S.

So the brand has brought English-language U.S. creative back into the U.S. with Dallas-based iNSPIRE. Spanish-language creative in both countries stays with Olabuenaga. "iNSPIRE really specializes in bicultural consumers, so the marketing is more inclusive," says Palau. The company also did a promotion around the Super Bowl this year.

Tecate's main sports touchpoint remains boxing, which it promotes both in its main markets -- sunbelt states -- and in big markets like New York where it doesn't sell at retail. Through it's long-term deal with Top Rank, the company sponsors two or three major fights per year. "Boxing gives us that kind of reach." The New York reach gets the brand into the major new mega-venue in the Big Apple, Barclays Center in Brooklyn.

That Tecate markets almost exclusively to Hispanic Americans -- the only major Latin-American brand to do so -- probably puts it in good stead, as the population of the U.S. will be mostly Hispanic by 2050.